Most people are already familiar with the thick and square-shaped sanuki udon as it’s the “default” udon served in Japanese restaurants. But udon exists in a wide variety of forms and shapes, and many regions in Japan have their own spin on things. Here are 11 types of udon and how they’re served in different regions of Japan. 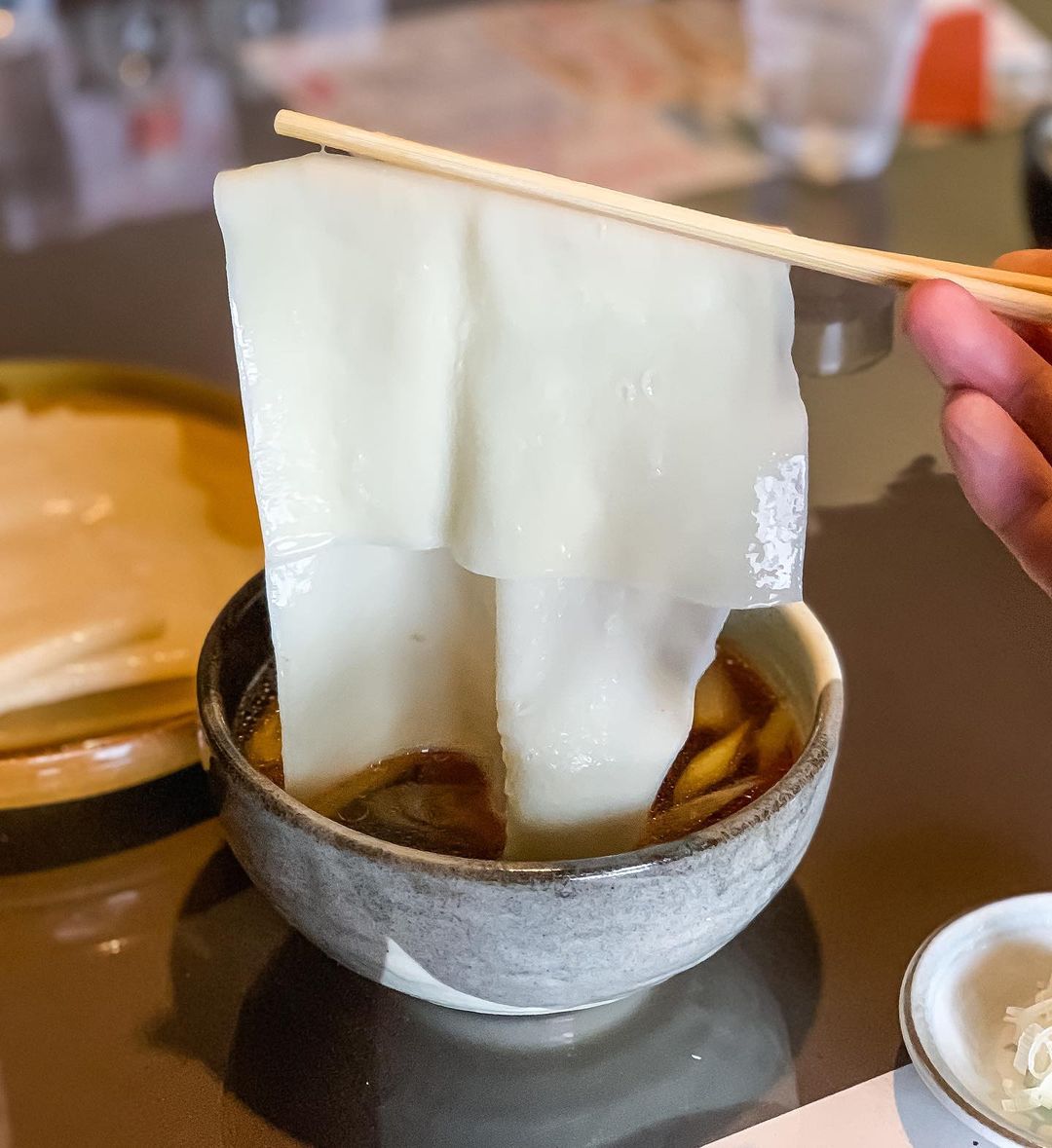 Traditionally made in Kiryū, a historic mountain city located in Gunma Prefecture, himokawa udon (ひもかわうどん) is a type of flat and thin wheat noodle. The width of himokawa udon differs from restaurant to restaurant, and it’s not uncommon to find ones that are up to 15cm in width. 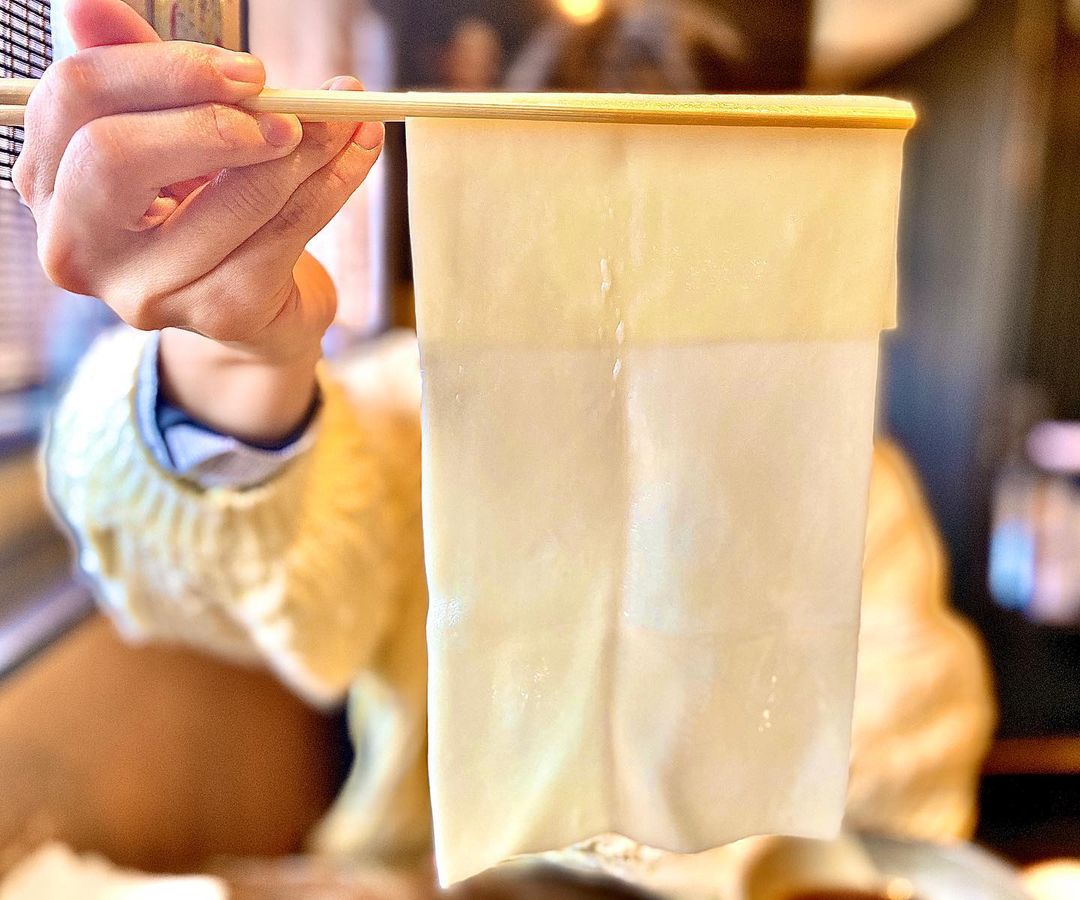 As the dough is rolled out to a thin sheet, the noodles are much more delicate in texture compared to the chewy sanuki udon. Himokawa udon can be enjoyed hot or cold, though we don’t recommend slurping these noodles as you’d do with ramen – you’d face difficulties doing so due to its sheer width. 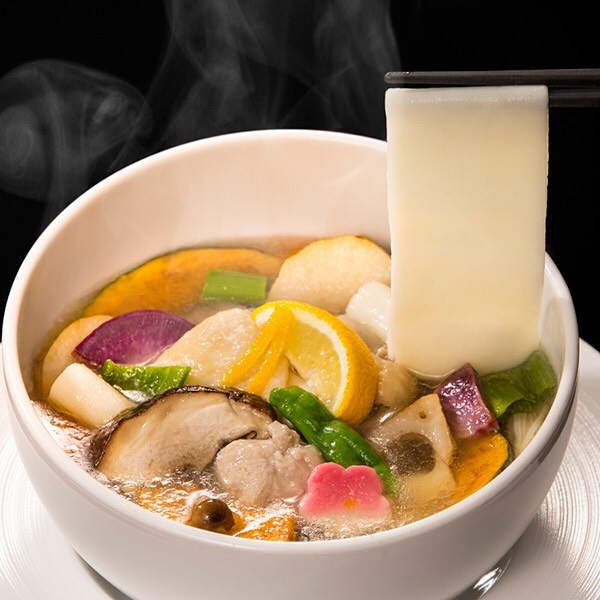 Locals like to consume the udon as part of an okkirikomi (おっきりこみ), a traditional Gunma dish that comprises chopped seasonal vegetables in a hot savoury broth. 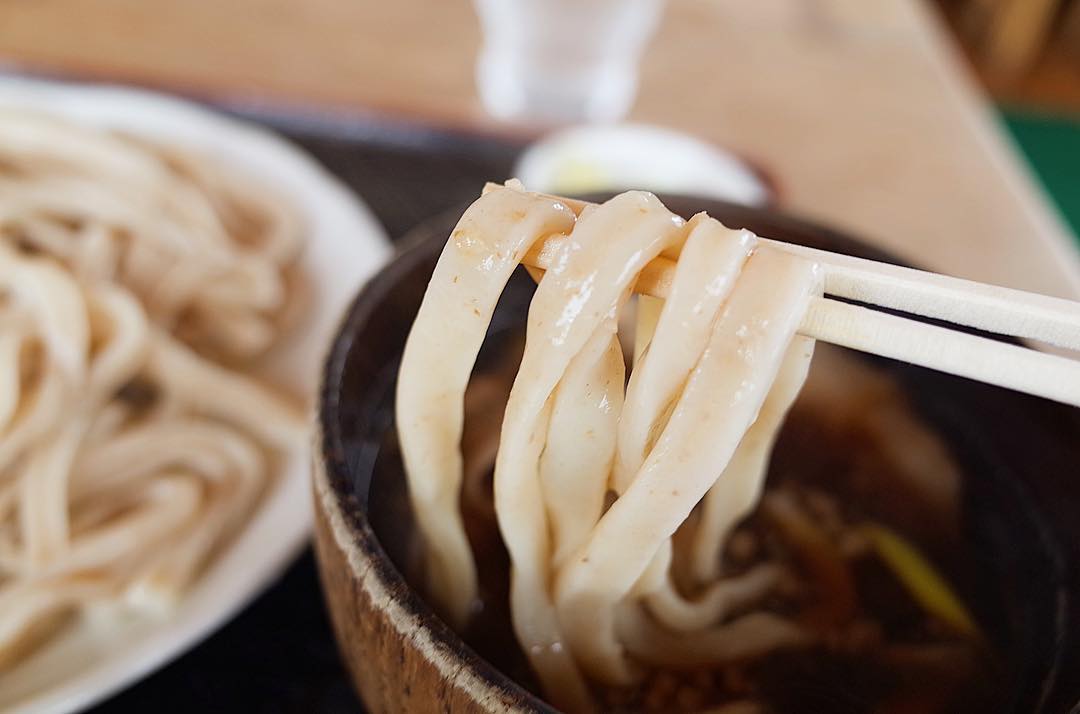 Musashino udon (武蔵野うどん) is a type of udon that originated from the Musashino Plateau, a region that stretches from the Tama area in north-west Tokyo to part of Saitama Prefecture.

Since there are no large rivers in the area, local agriculture is centred on the production of wheat and barley, which require less water to grow compared to rice. Over time, it became customary to make udon with locally grown wheat flour. 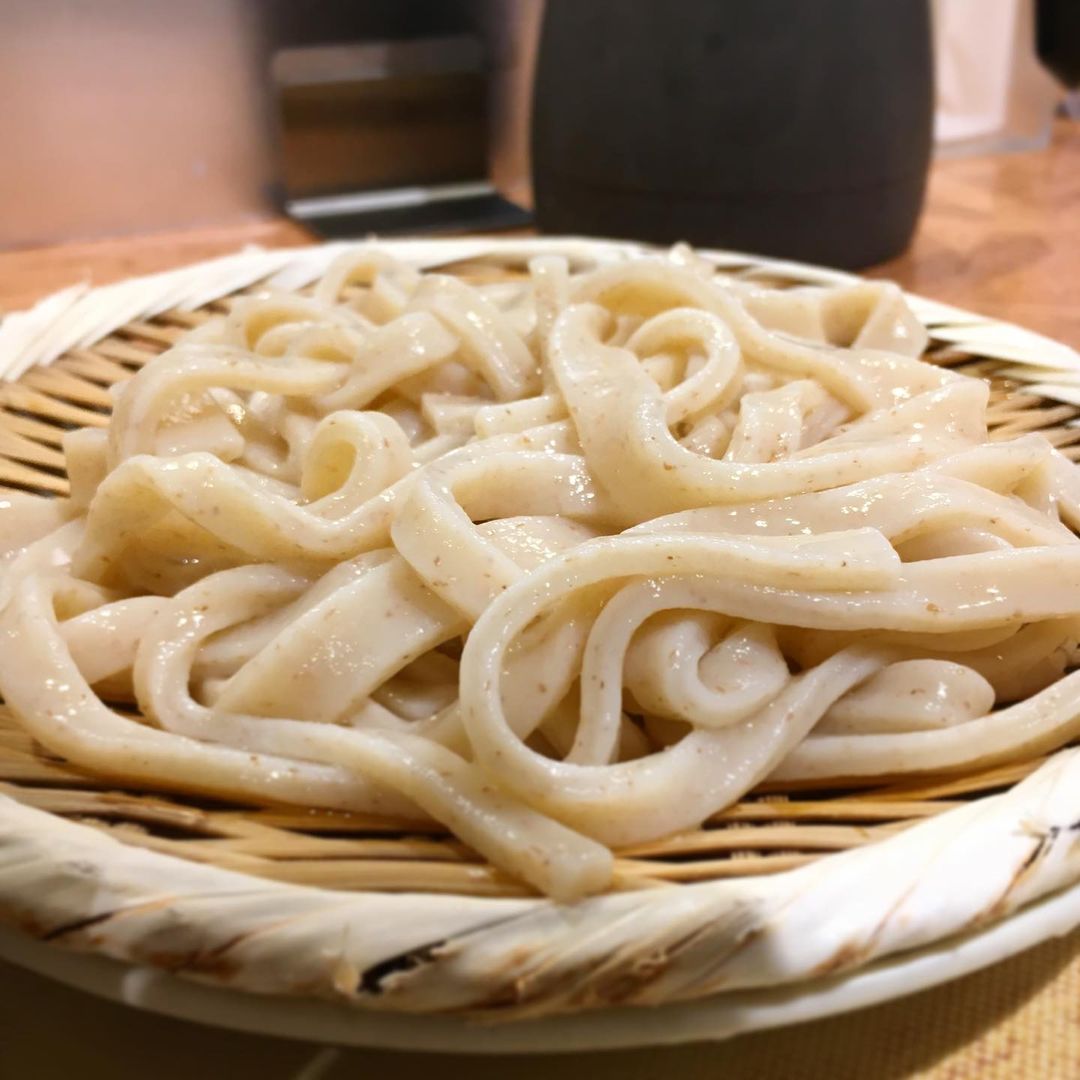 Due to the addition of local wheat, musashino udon is characterised by its slight brown colour, as opposed to the pristine white of ordinary udon noodles. Though distinctly chewy like your everyday udon, the musashino variant also has a slightly rough texture. Shaped like ears, mimi udon (耳うどん; ear udon) is a traditional food that has been passed down from generation to generation in the Senba area of Sano City.

Though the dish was intended to be preserved food for the new year, it gradually became synonymous with auspiciousness. Now a customary dish enjoyed by locals on New Year’s Day, mimi udon is usually served in soya sauce-based broth. 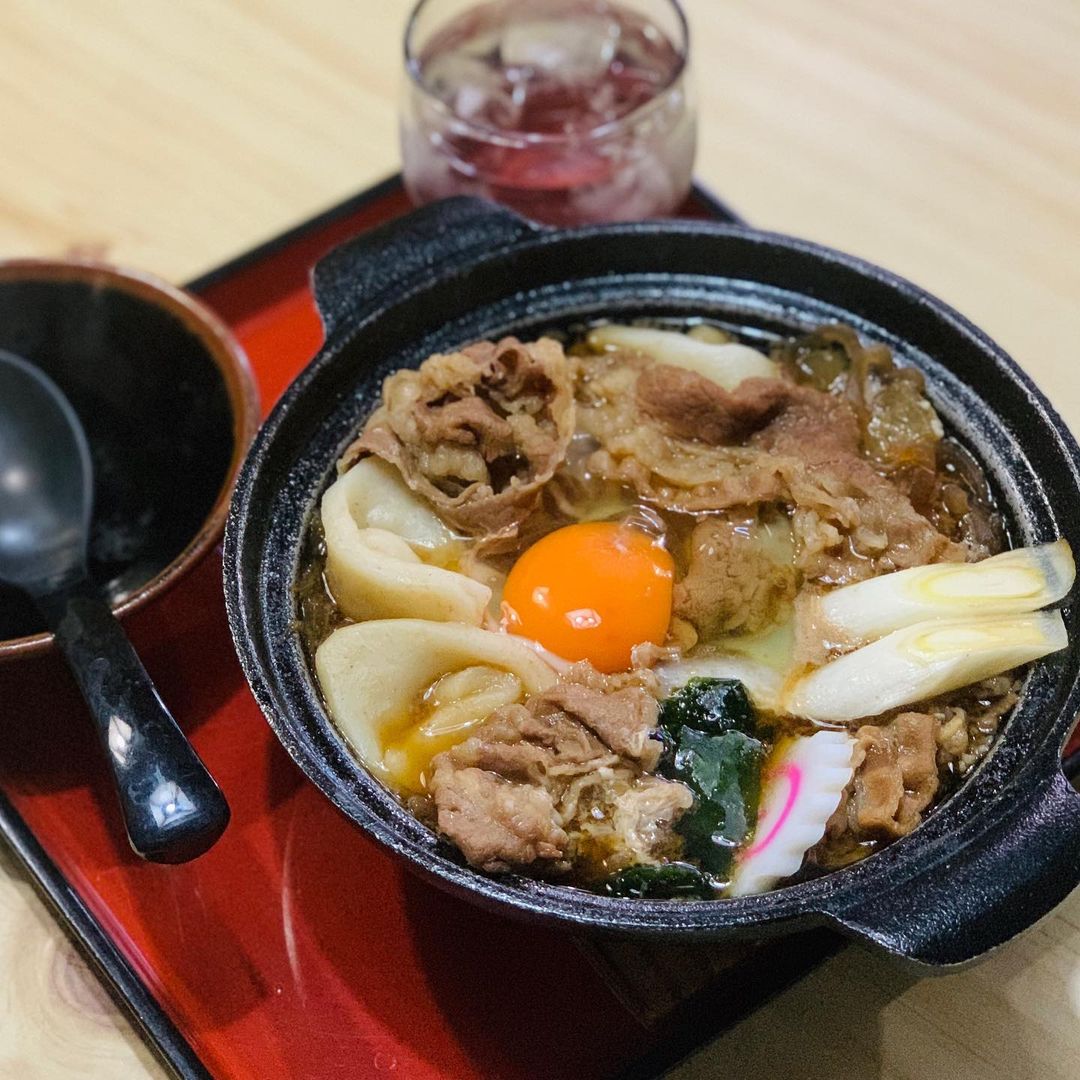 According to local belief, mimi udon represent the ears of an evil deity. By eating the ear-shaped noodles, it is said that the deity will not be able to eavesdrop on your family and bad things will not happen for a year. 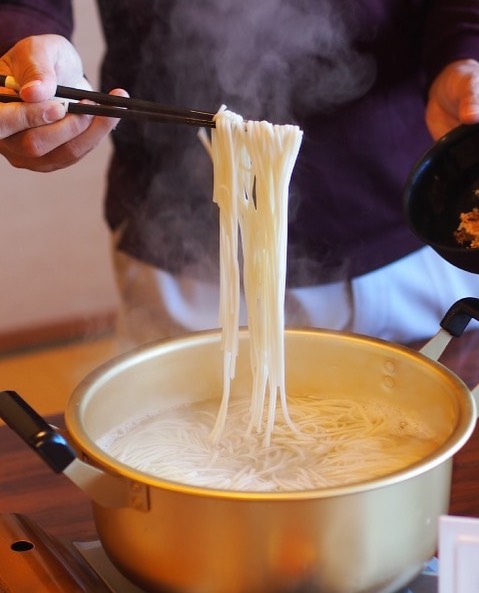 In Japanese, hippari (引っ張り) refers to the action of pulling. Hippari udon (ひっぱりうどん) is a regional dish that has its roots in Yamagata Prefecture. As winter is known to be harsh in the Tohoku region, which is where Yamagata Prefecture is located, dried udon noodles and canned food are common kitchen staples. 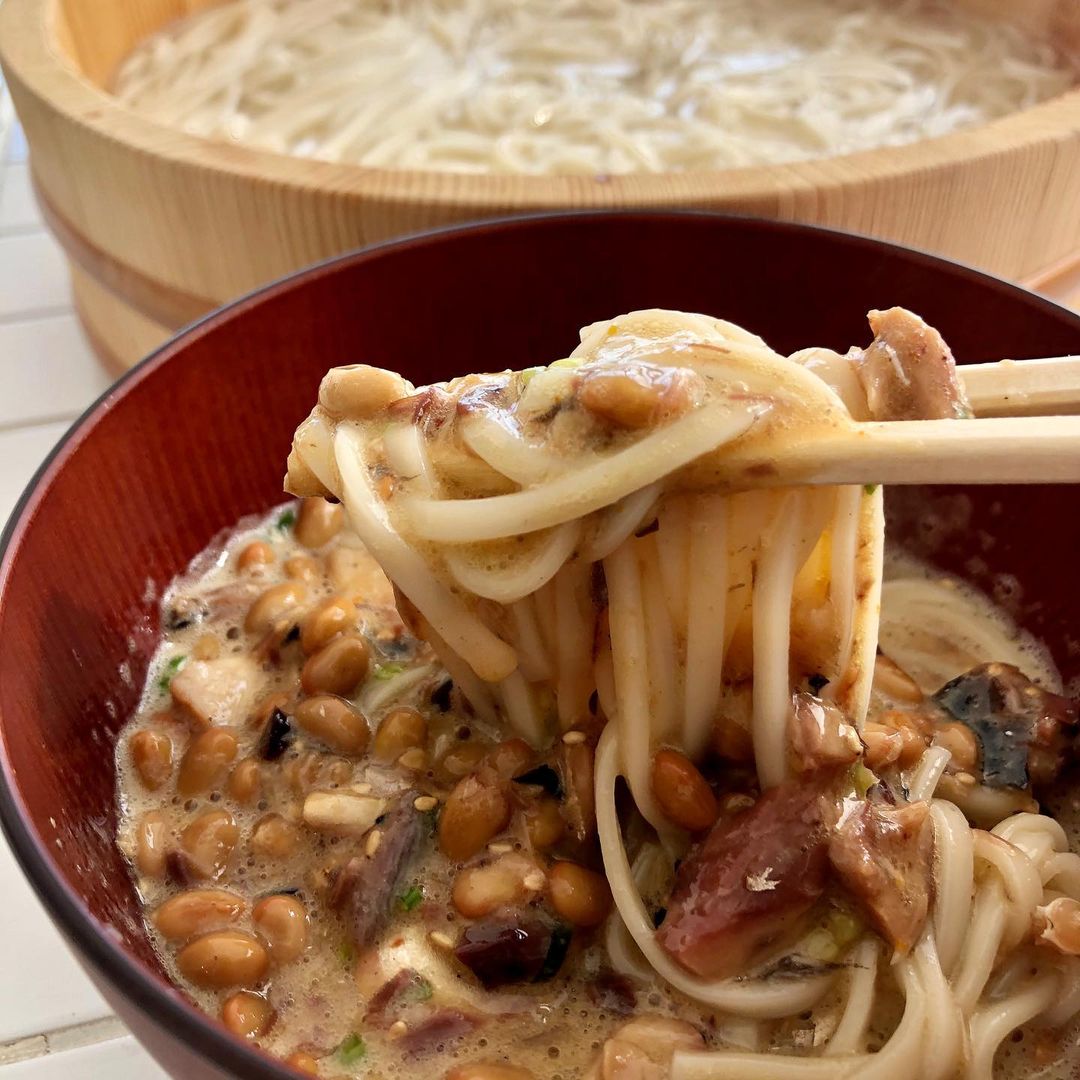 Dried noodles are boiled and pulled from a pot, then served in individual bowls of dipping sauce made from natto or canned mackerel. As one can easily prepare a hot meal without having to brave the cold while grocery shopping, hippari udon became a popular meal during colder months. 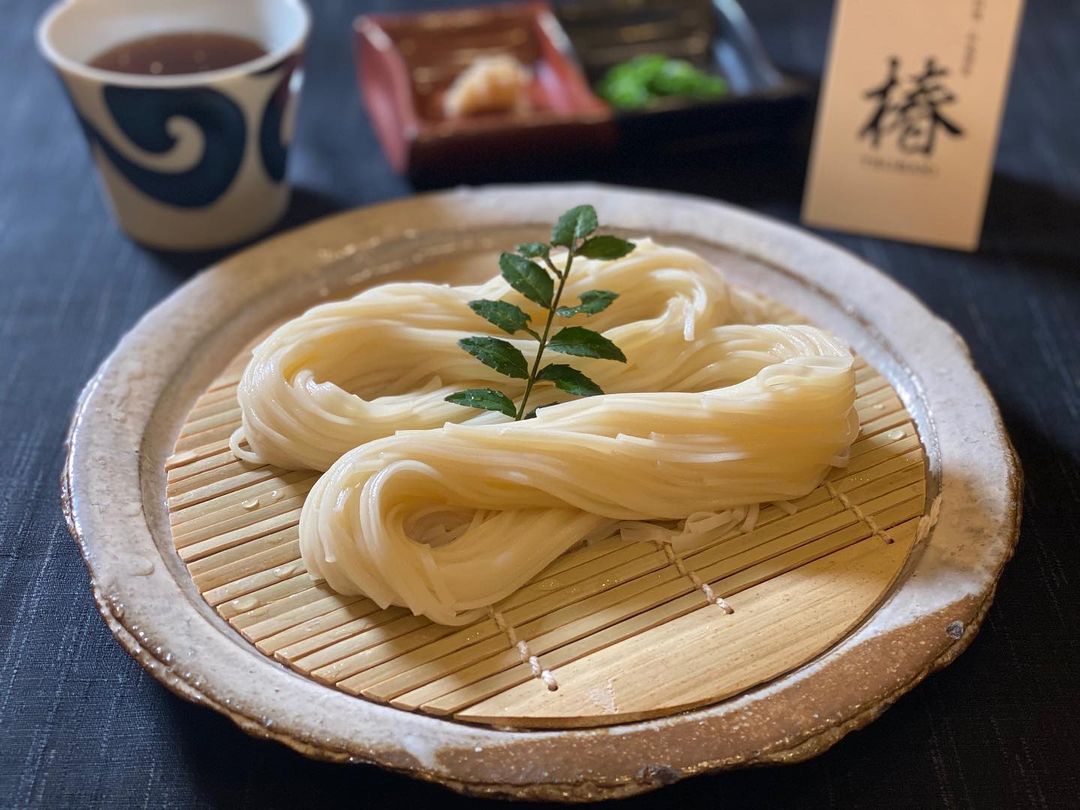 Boasting a history of over 350 years, inaniwa udon (稲庭うどん) is 1 of the 3 most well-known types of udon noodles in Japan. Commonly available in its dried form, inaniwa udon can be identified by its cream colour and distinctive thin strands. 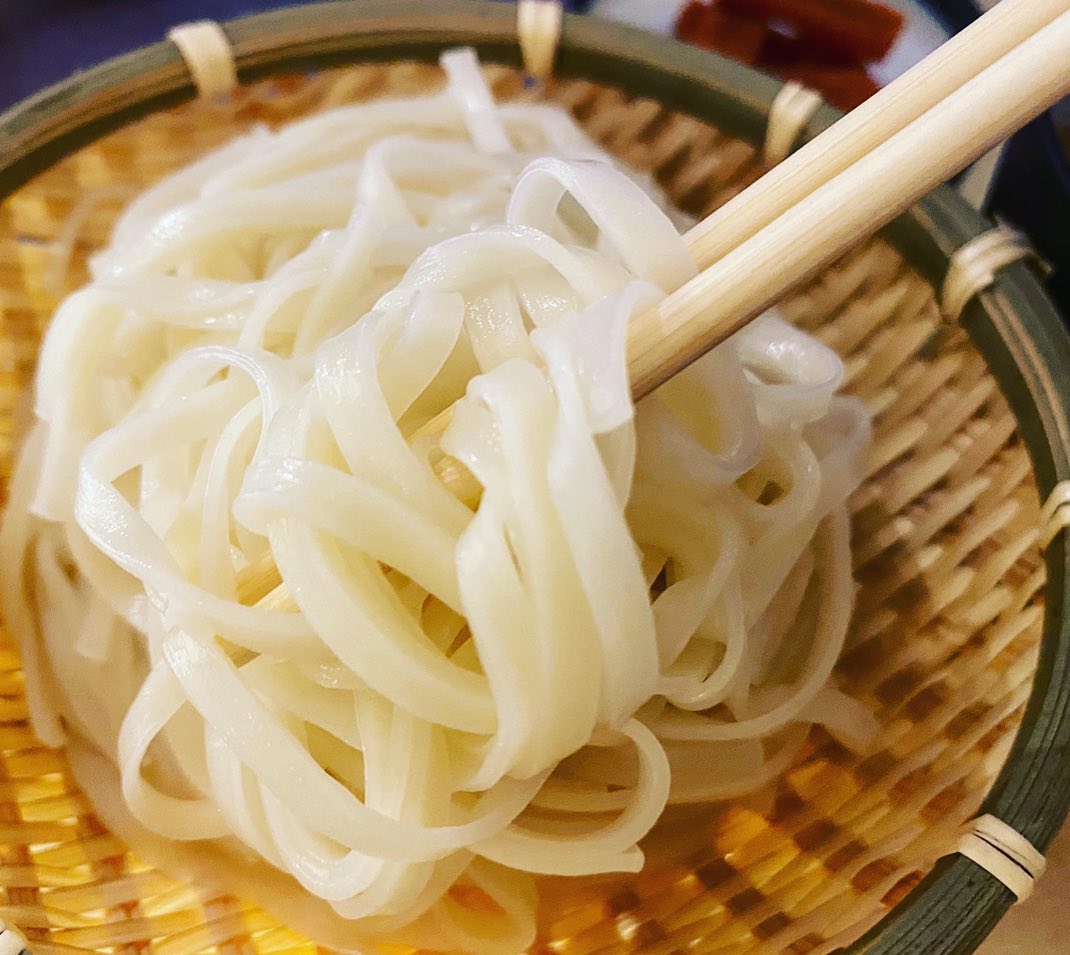 To make inaniwa udon, the dough first goes through a lengthy process of kneading, stretching, twisting, and flattening. Once it’s shaped into thin strands, the raw wheat noodles are then aged for a period of time. Thanks to the air bubbles incorporated into the dough during the production stage, inaniwa udon has a smooth texture and light mouthfeel. 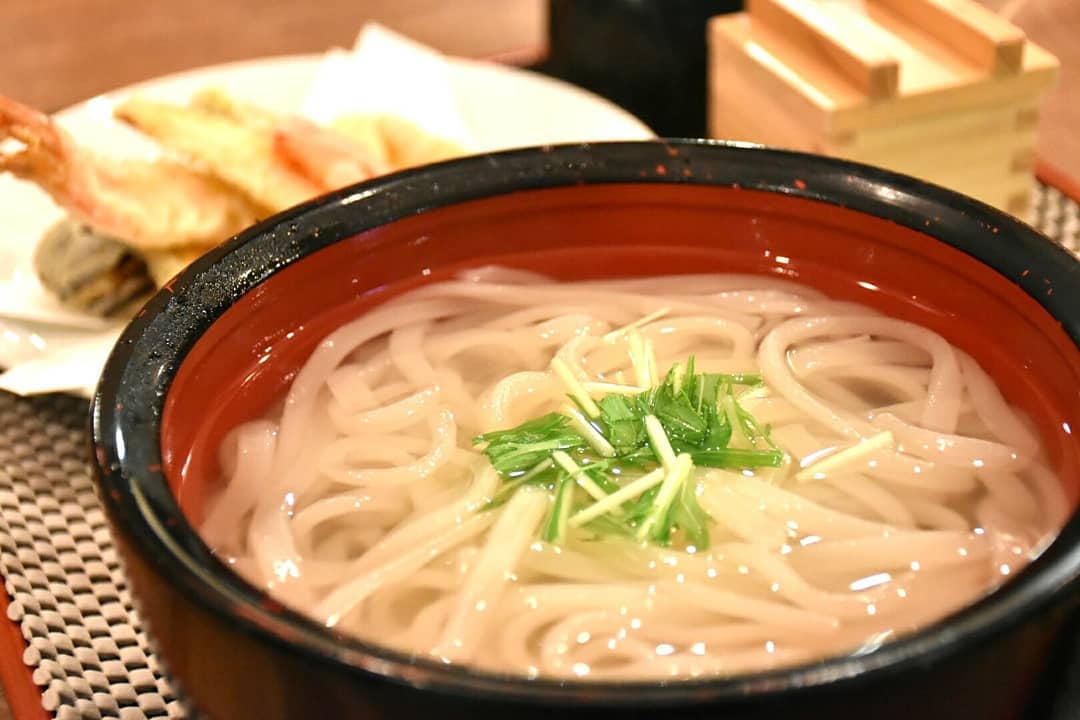 Udon is usually made with wheat flour, but gōsetsu udon (豪雪うどん) calls for potato starch instead. Originating from the small town of Kutchan, a major potato-producing region in Hokkaido, gōsetsu udon is chewier than your average udon noodle and has a unique texture. The udon variant is named gōsetsu (heavy snow) as Kutchan experiences one of the heaviest snowfalls in Hokkaido, accumulating to nearly 2m in height each year. Its translucent appearance is also likened to fresh snow. 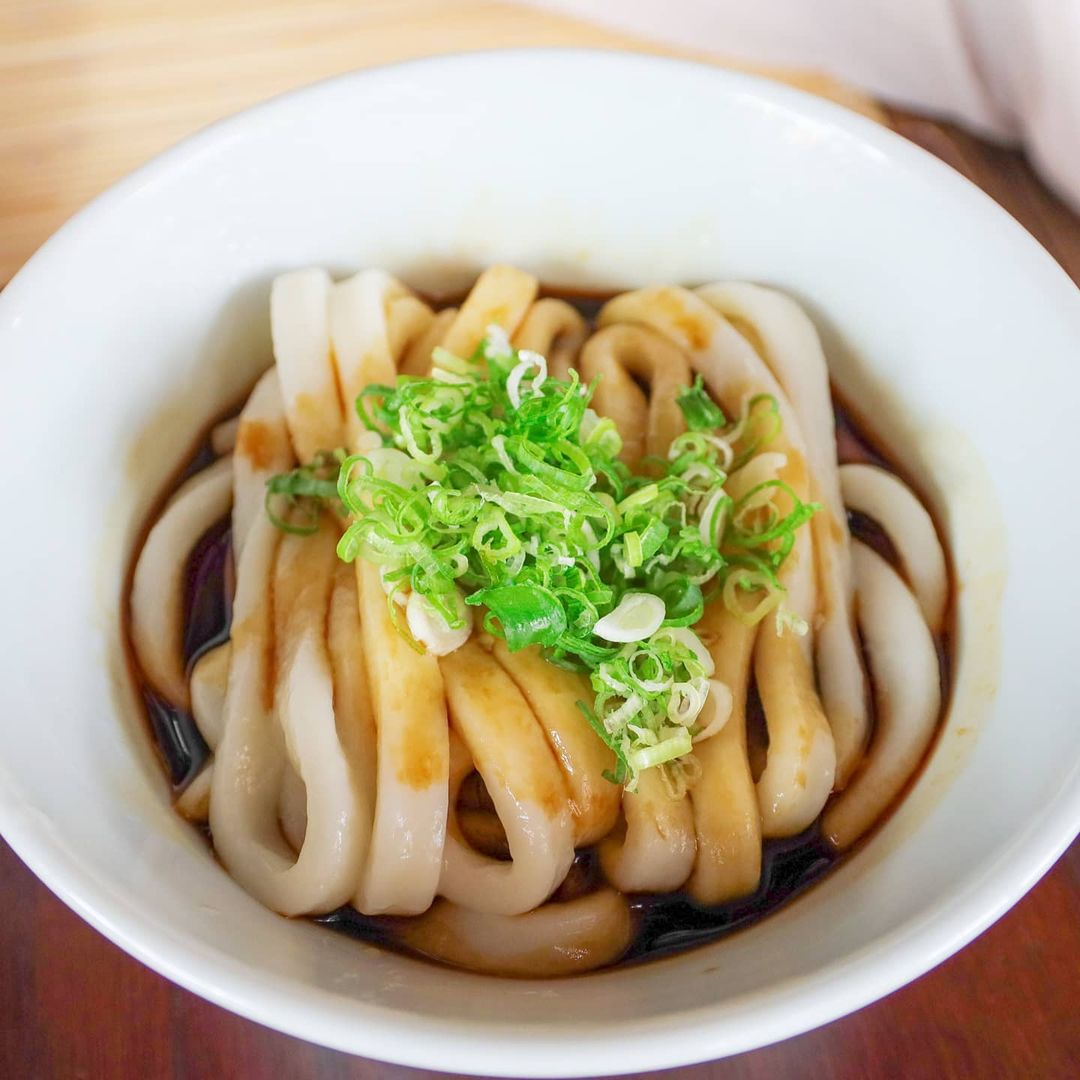 Noodles aficionados who love udon noodles for their distinct chewiness may find that Ise udon (伊勢うどん) wanting. This speciality dish is unique to Ise City of Mie Prefecture. Extra-thick udon noodles around 1cm in diameter are boiled longer than usual, making them tender and soft. Ideally, the exterior of the udon noodles should be slightly mushy while the middle should retain a bit of chewiness and integrity. The soft udon noodles are doused in an umami-filled dark sauce that’s made with tamari soya sauce, then topped with sliced green onions. 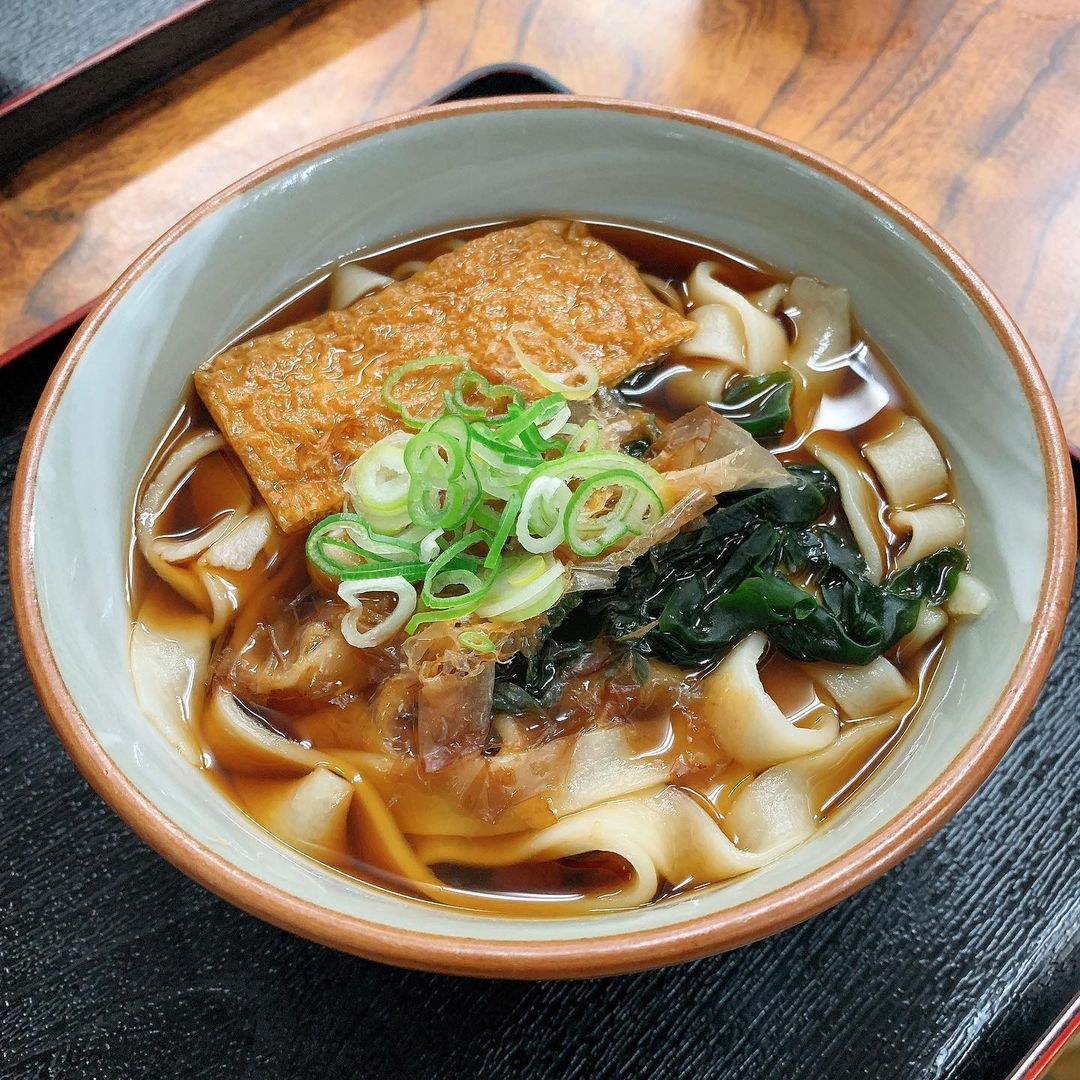 Kishimen (きしめん) is a flat udon noodle that has been the soul food of Aichi Prefecture – especially Nagoya – since the Edo Period. With a thickness of 1mm and width of up to 8mm, kishimen is characterised by being wider and thinner than ordinary udon noodles. 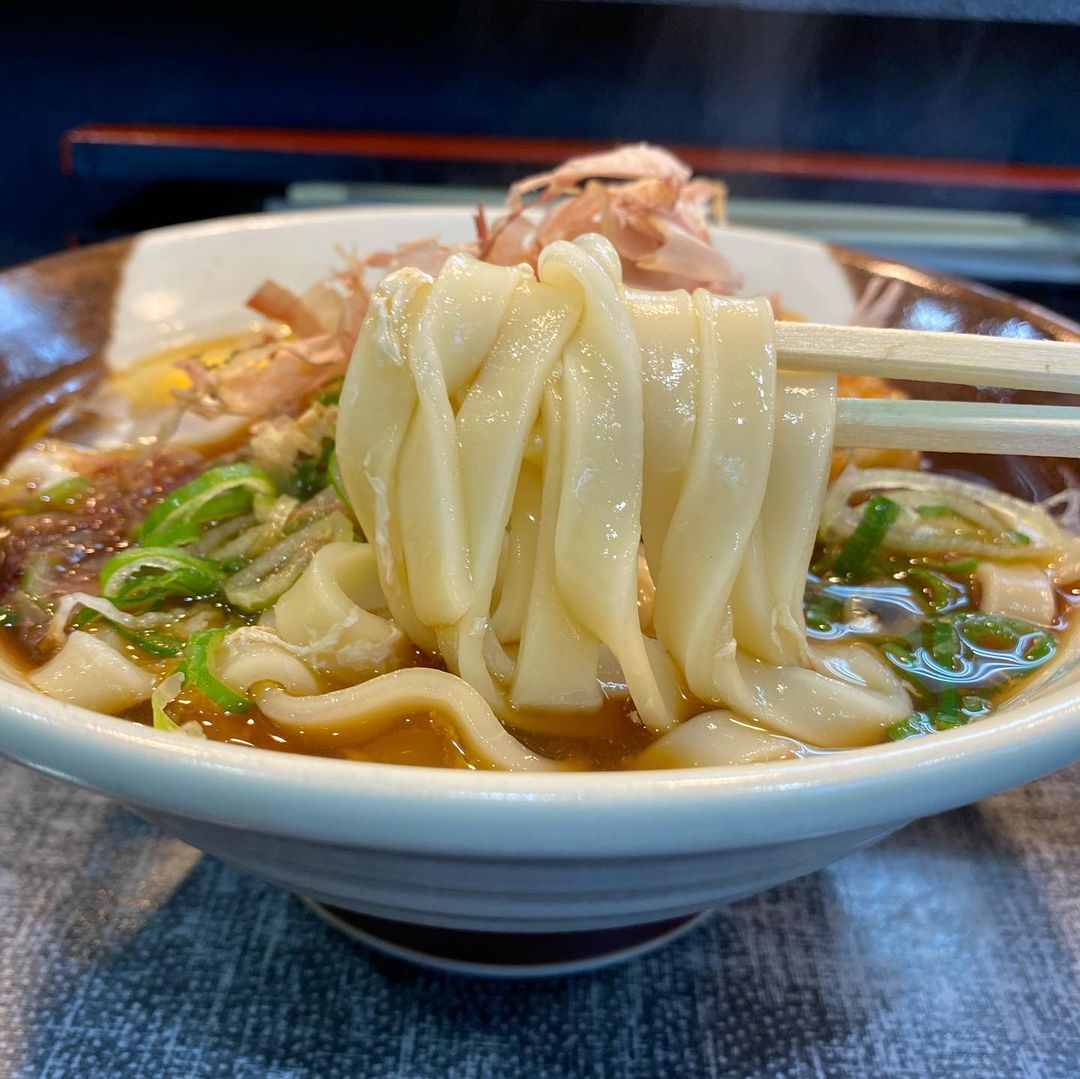 Its shape is said to be instrumental in its popularity. Locals swear by the flat noodle as it is supposedly better able to absorb the flavours of the broth. As compared to sanuki udon, the more flavourful kishimen suits the taste buds of the people in Aichi Prefecture, who prefer strong flavours. Essentially a kitsune udon – a classic udon dish topped with a slice of aburaage – in reverse, kinchaku kitsune udon (巾着きつねうどん) takes wheat noodles and encases them in a pocket of fried tofu. The dish was invented in Nara prefecture in 2006 and is now a must-have local speciality for anyone visiting the area. 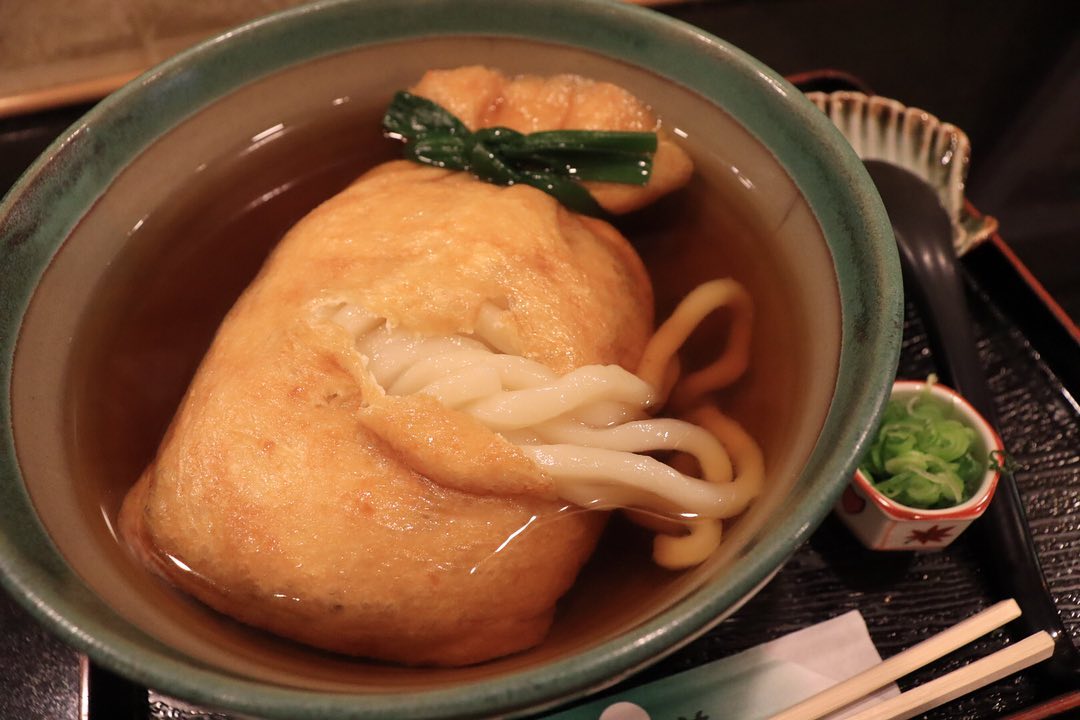 Filled to the brim with udon noodles, the aburaage is tied with a string of long green onion. The tofu bag, which resembles a drawstring pouch, is served with warm dashi broth. To consume, use your chopsticks to tear open the aburaage and reveal the udon noodles hidden within. Naruchuru udon (鳴ちゅるうどん) is a type of thin noodle commonly eaten in Naruto, a coastal city in Tokushima Prefecture. As it is handmade, naruchuru udon is characterised by its uneven thickness and length. 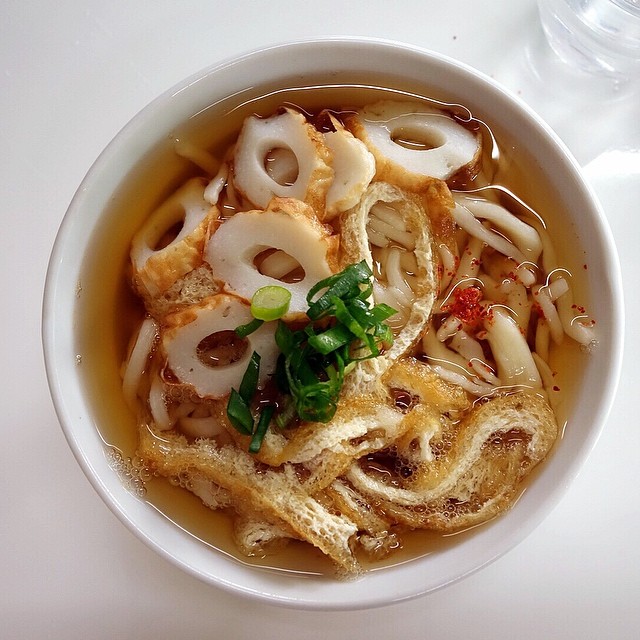 The noodles are served in a light golden broth that’s sweeter than the dashi broth you’d find in most udon dishes. Simple toppings such as sliced aburaage, chikuwa (fish cakes), and fresh green onions are local favourites. 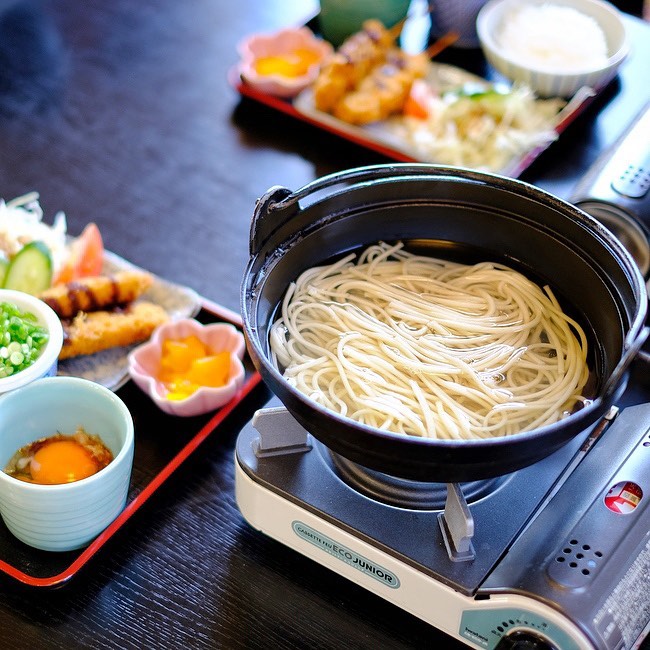 Though it’s thin, gotō udon (五島うどん) is known for its strong elasticity. Originating from the Gotō Islands in Nagasaki Prefecture, the regional speciality is considered 1 of the 3 best udon noodles in Japan. However, it’s not as well-known as its counterparts, the sanuki and inaniwa udon. 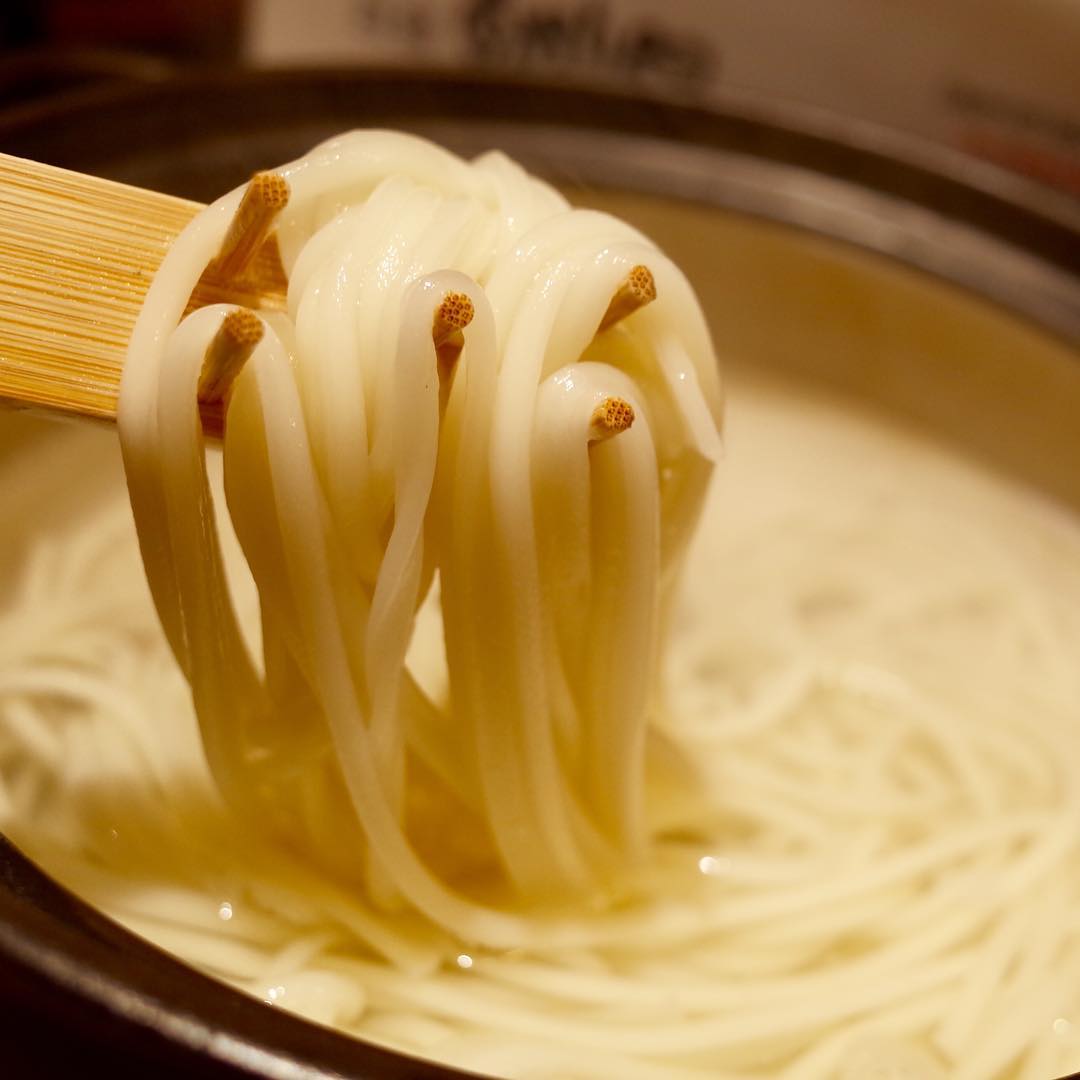 In Gotō, the udon noodles are traditionally enjoyed through jigoku-daki (地獄炊き; hell-boiling), a process where the noodles are cooked in pots of boiling water and served straight.

It is said that the name was derived when a traveller who ate it for the first time praised it by saying “shigoku oishii” (至極美味しい; extremely delicious), but was misheard as “jigoku oishii” (地獄美味しい; hell is delicious). Over the years, locals have devised tools and scoops to easily fish out these hellish noodles.

Now that you have the knowledge of the various types of udon at your disposal, consider venturing beyond the basic sanuki udon and try out different regional variations the next time you’re in Japan.

For more articles about Japanese culture, check out these: 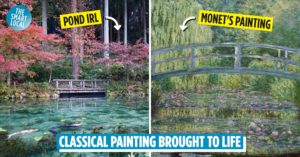 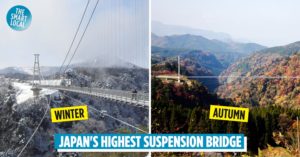