From Gen Zs to Millennials, nearly everyone’s heard of Pokémon – some even cherish it as their favourite childhood game or anime. To help you pay homage to the all-time popular Pokémon franchise, here are 25 Pokémon fun facts that’ll spur you on to appreciate Pokémon anew.

When talking about Pokémon, we can’t leave out its iconic mascot, Pikachu. Yet, as much as it is known as the face of Pokémon, Pikachu wasn’t originally among the franchise’s top mascot candidates.

Back in the day, the creators were planning on having either Poliwhirl – Pokémon creator Satoshi Tajiri’s favourite Pokémon – or Clefairy appear at the forefront of Pokémon’s promotional activities.

Poliwhirl was famously featured as the mascot for Pokémon in a 1999 issue of TIME Magazine, while Clefairy was the main protagonist’s 1st Pokémon in the 1st Pokémon manga release.

However, the creators eventually picked Pikachu as the franchise’s representative mascot since it was more popular than Poliwhirl and more gender-neutral than the pink Clefairy.

2. Rhydon is the 1st Pokémon ever created

Charmander, Bulbasaur, and Squirtle were the original 3 starter Pokémons, so you’d assume one of them would clinch the title of being the 1st Pokémon ever created. But that honour actually goes to Rhydon, which is No. 112 on the Pokédex.

Contrary to its current diverse lineup of Pokémon of different species, the franchise was originally intended to only encompass different types of dinosaurs, with starter dinosaur Pokémons such Rhydon and Lapras. Each Pokémon was designed to serve a particular purpose, such as transporting the human characters or fighting on their behalf.

Boasting immense global popularity, Pokémon was venerated as the best-selling RPG video game series in the Guinness World Records in 2021. While it’s natural for characters that appear in popular games or anime series to gain fame of their own, Pokémon‘s characters are in a whole other league.

Some Pokémon individually hold Guinness World Records. For example, Greninja was once the most popular Pokémon according to a 2016 popularity poll of 562,386 Pokémon fans in Japan.

Other Pokémon record holders include Cosmoem and Celesteela as the heaviest Pokémon.

4. Pikachu and Meowth have opposite Pokédex numbers

Since Pokémon‘s main protagonist, Ash Ketchum, is always at odds with Team Rocket, their Pokémon are also understandably not friendly with each other. Well- known archenemies Meowth and Pikachu are often shown fighting each other.

Meowth and Pikachu’s rivalry is further highlighted by their opposite Pokédex numbers – Meowth is No. 52, while Pikachu is No. 25.

5. Pikachu was designed after a squirrel

Given how Pikachu is constantly depicted as being at odds with Meowth, just like Tom and Jerry in Tom and Jerry, many believe that Pikachu’s design was based on a mouse. Additionally, Tajiri once referred to Pikachu as an electric mouse, validating fans’ assumptions.

However, Atsuko Nishida, Pikachu’s creator, clarified that she based the cute Pokémon mascot on a squirrel.

According to Nishida, she gave Pikachu the ability to emit electricity from its cheeks to mimic squirrels’ tendency to store food in their cheeks while eating.

6. There’s an enzyme named after Pikachu

In 2008, Japanese scientists at the now-closed Osaka Bioscience Institute discovered an enzyme that improved signal transmission from the eye to the brain by 4 times, enabling one’s eyes to better follow a moving object. As they were reminded of Pikachu’s agility, the scientists named the newly discovered enzyme “Pikachurin”.

Pikachu is featured on the $1 coins of Niue, a self-governing small island country that freely receives political and military aid from New Zealand. Niue minted the Pokémon-themed coins in 2001. Besides Pikachu, other popular Pokémon such as Meowth, Bulbasaur, and Charmander also made an appearance.

While the coins are accepted as legitimate currency, many keep and trade it as a collectible due to its rarity.

8. Some Pokemon are eaten as delicacies

Since Pokémon are usually deployed to fight on their trainer’s behalf, it’s easy to forget that they’re originally from the wild. That means that canonically, some Pokémon are hunted for game, while some are actually predators. For example, Slowpoke uses the sweet syrup its tail secretes to fish for food.

Due to its sweet tail, Slowpokes are eaten as a delicacy by Pokémon trainers in the anime series.

9. Slowbro has a chance of devolving

Perhaps owing to its sweet-tasting tail, Slowpokes have a unique evolution requirement: to successfully lure a particular Pokémon to latch onto its tail. More specifically, in order to evolve into Slowbro, Slowpokes need another Pokémon called Shellder to continuously bite on its tail.

However, as the evolved version of Slowpoke is basically a combination of 2 separate Pokémon, Slowpoke devolves just as easily as it evolves. Should Shellder somehow detach itself from Slowbro either out of its own volition or from external impact, Slowbro will turn back into Slowpoke.

Most fans know that Poliwag’s design is based off a tadpole, but they also tend to dismiss the character’s most iconic feature – the spiral on its stomach – as a fictional hallmark added by the designer.

However, tadpoles do in fact have their small intestines appearing as a spiral on its belly.

As a tadpole’s stomach is translucent, the spiral pattern is visible to the naked eye.

11. Misty’s Psyduck mastered a basic skill ¾ into the anime

Pokémon, just like humans, are born with different stats and improve at different rates. But Misty, Pokémon‘s female protagonist, owns a Psyduck that possesses a lower–than–average learning ability.

Notoriously inept at combat compared to its peers, Misty’s Psyduck only mastered one of its most basic skills, Water Gun, 942 episodes into the approximately 1,200-episode series. Poor Psyduck.

Height differences between 2 characters are usually considered adorable, but that’s not true in a Pokémon battle. If the 10cm-tall Flabébé ever fought with the 20m-tall Eternatus, they’d contend for the longest battle in history.

13. Some Pokémon breed both asexually & sexually

Just like animals in real life, Pokémon can breed either asexually or sexually. But some overachieving Pokémon are capable of breeding both asexually and sexually. An example of such a unique Pokémon is Chansey, a normal-type female-only species.

When reproducing asexually, Chansey produces an egg that’s a clone of itself. In situations where a trainer breeds a Chansey with a Ditto, Chansey lays an egg of a different Pokémon called Happiny.

14. Plans for Dolly-inspired Pokémon were scrapped

In 2011, The Pokémon Company came up with a design inspired by the famous cloned sheep, Dolly the Sheep. However, the design was never publicly released as it was internally rejected due to concerns over controversies.

If the design had materialised, Dolly the Sheep would most likely have had a cloning skill.

15. Mew’s clone was registered in the Pokédex before Mew

The seemingly illogical order is because Mew’s existence was only meant to be revealed in the later stages of Pokémon. To prevent players from discovering Mew’s existence too early, Mewtwo had to be registered in the Pokédex first.

Unfortunately, due to a bug, Mew prematurely showed up in some players’ Pokémon games. That spurred the developers to kickstart the Legendary Pokémon Offer, where 20 selected players could send in their game cartridges to have the data for Mew inputted.

Inspiration for various anime characters have been drawn from Japanese folklore, and Pokémon is no exception. Drowzee, a Pokémon that famously devours dreams, had its unique skill inspired by the animal it resembles – a tapir.

In Japanese folklore, tapirs symbolise “sweet dreams” as they are rumoured to eat nightmares. To boost their chances for a good night’s sleep, some Japanese people keep a painting or drawing of a tapir near their bed as a good-luck charm that wards off nightmares.

17. The creator of Pokémon was inspired by insect-catching

Ardent fans will know that Pokémon actually started out as a video game called Pocket Monsters: Red and Green.

Inspired by his childhood hobby of catching insects, Pokémon creator Tajiri imagined a game where players could gather and trade different Pokémon to continually expand their collections.

Despite Pokémon‘s current explosive fame, it was actually dismissed multiple times by Nintendo as execs thought it was an overly complex and unfeasible idea. If not for Shigeru Miyamoto, the general manager of Nintendo back then, Pokémon might not have had its chance to shine and grow into a media giant.

Back in the day, Miyamoto took an interest in Tajiri’s proposal and personally pitched the concept of Pokémon in an internal meeting. He then received approval to go ahead with the proposal, which helped Tajiri take one step closer to bringing the Pokémon video game to fruition.

19. The anime was meant to be purely promotional

Shortly after releasing Pocket Monsters: Red and Green in 1996, The Pokémon Company aired an anime adaptation to promote the video game. Originally scheduled for only 1 season, the anime got so popular that the company decided to extend it.

Nobody could’ve expected that the Pokémon anime would last for 25 seasons and counting, possibly becoming even more popular than the video game itself.

20. Ash’s Japanese name was inspired by the creator’s

In the Japanese version of Pokémon, the male protagonist goes by Satoshi (サトシ), which just so happens to be the first name of Tajiri. That’s because Satoshi goes around collecting and learning more about different Pokémon, just like Tajiri did with insects when he was young.

Magikarp, a water-type Pokémon, is notorious for its signature Splash skill, which makes the poor Pokémon flail in front of the enemy like a fish fresh out of water. Though impractical, the skill effect realistically depicts Magikarp’s helplessness against enemies when displaced from its natural water habitat.

However, some Pokémon fans find it strange that even non-water Pokémon, such as the normal-type Buneary, also possess the same Splash skill. It turns out that the skill name was mistranslated from Japanese to English. Called “haneru” (はねる) in Japanese, the skill is more accurately translated as “jump” or “hop”.

23. Pokémon’s full name is in English

Considering how Pokémon originated in Japan, English speakers may be tempted to pronounce Pokémon more Japanese-like – “Po-keh-mon” instead of “Po-key-mon”. But here’s the curveball: Pokémon‘s full name, Pocket Monsters (ポケットモンスター), is completely derived from English.

The key to guessing whether a Japanese game’s name stems from Japanese or English is to look at the Japanese writing system used. There are a total of 3 Japanese writing systems – hiragana, katakana, and kanji. Katakana appear more angular than hiragana and are used more for foreign words. In this case, ポケットモンスター is written in katakana, suggesting that the game’s name stems from a foreign language.

24. There are Pokémon manhole covers in Japan

In addition to attracting footfall, the Pokémon manholes double as PokéStops in the popular Pokémon Go game, where players can find wild Pokémon and random items.

25. Several Pokémon are designed by a foreigner

In 2010, over a decade since the Pokémon anime series started airing, a non-Japanese creator designed Pokémon characters for the first time. The said designer is James Turner, who created Pokémon such as Gigantamax Gengar and Gigantamax Pikachu.

While Turner has since left The Pokémon Company, fans are still able to catch his designs in the anime series.

Pokémon is a franchise that’s old enough to pay taxes if it were human, yet it shows no signs of going out of style anytime soon. As Pokémon continues to flourish amidst ever-growing international fame, fans can look forward to relishing in more Pokémon fun facts in years to come. 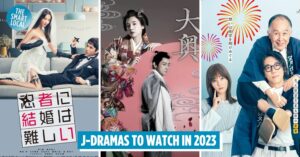 20 New Japanese Dramas In 2023 To Watch If You're Still Not Over First Love & Alice In Borderland
20 Slice Of Life Anime Conveniently Sorted According To Themes, From Fantasy To Iyashikei