Kento Yamazaki (山﨑賢人) – or YamaKen (ヤマケン), as fondly nicknamed by his fans – is a popular Japanese actor and model with 13 years of experience under his belt. Ahead of the release of Alice in Borderland Season 2, here are 13 fun facts about Kento Yamazaki that will give you a deeper insight into the actor who plays Ryōhei Arisu.

1. Aspired to be a football player

Yamazaki’s presence in the Japanese entertainment industry is a miraculous blessing as he did not consider a career as an actor or model at first. In fact, as a kid, Yamazaki dreamt of becoming a football player or coach.

He first developed interest in football in elementary school and actively played the sport from Grade 2 to Grade 9. As part of his school’s football club, he visited other schools to play competitive matches. 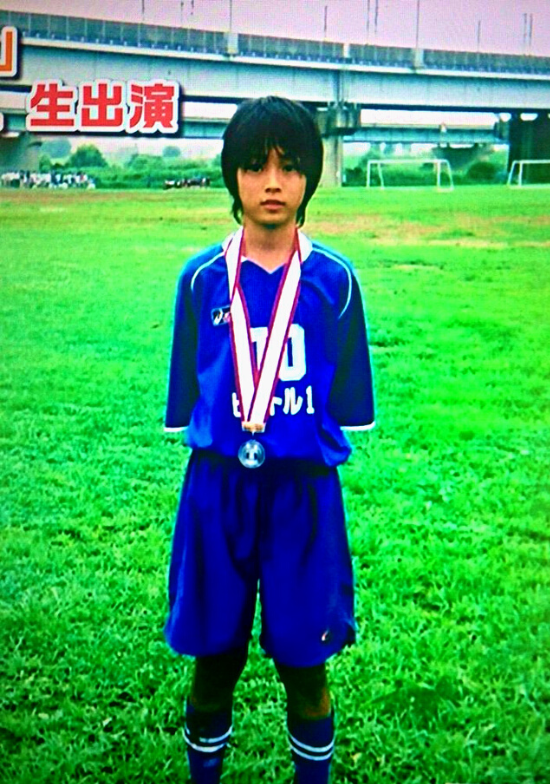 As testament to his love for the sport, Yamazaki played football with his friend before heading over to his agency for his first day of work in the entertainment industry.

While currently more known for his acting gigs, Yamazaki first debuted as a model for the now-defunct Pichi Lemon (ピチレモン) magazine in 2009. The publication focused on fashion for female Japanese teens. 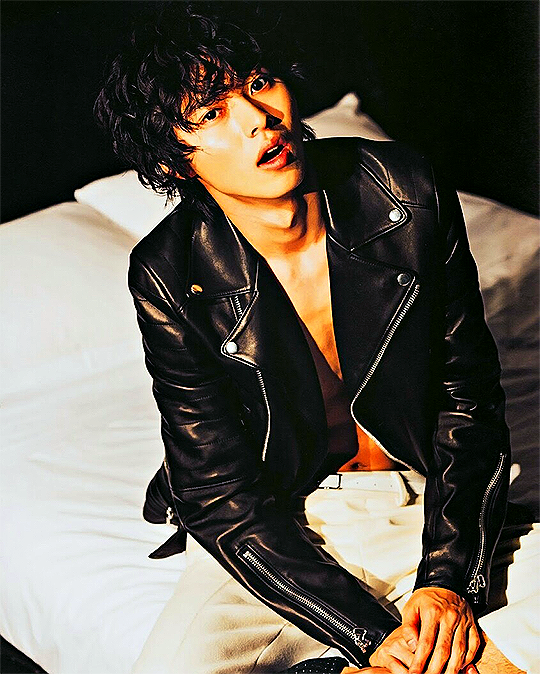 Yamazaki modelled for Pichi Lemon for 2 years, and notably, he participated in the magazine’s cross-dressing contest where male models styled themselves in womenswear and wigs. Yamazaki, who dressed up as a blonde miko (shrine maiden), wowed Pichi Lemon readers with his beauty and came in first place.

3. Has a realistic 3D model of himself

In collaboration with Japanese food company Kagome to promote a then-newly launched vegetable juice in 2018, Yamazaki attended a press conference in Tokyo that was also graced by his 3D model replica. 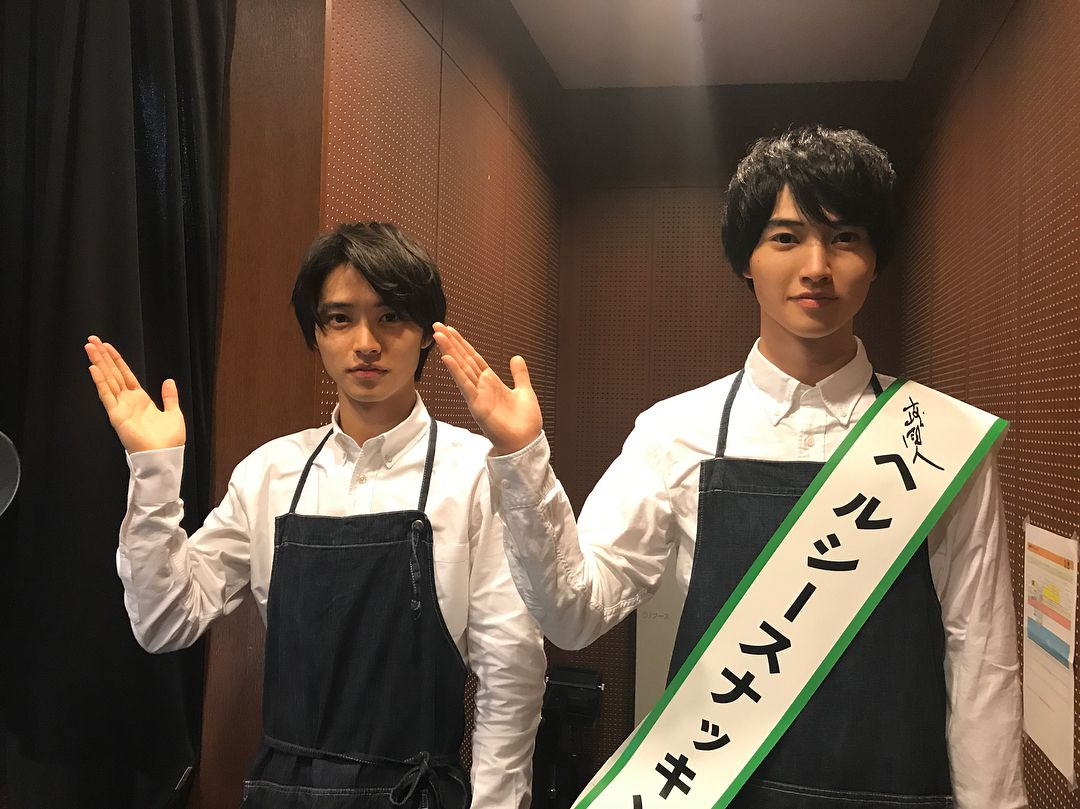 The 3D model was introduced to replace Yamazaki in similar press conferences in Osaka and Nagoya City, which he couldn’t personally attend. According to Yamazaki, who took twinning selfies with his replica after the conference, the model was human-like right down to the muscle feel. 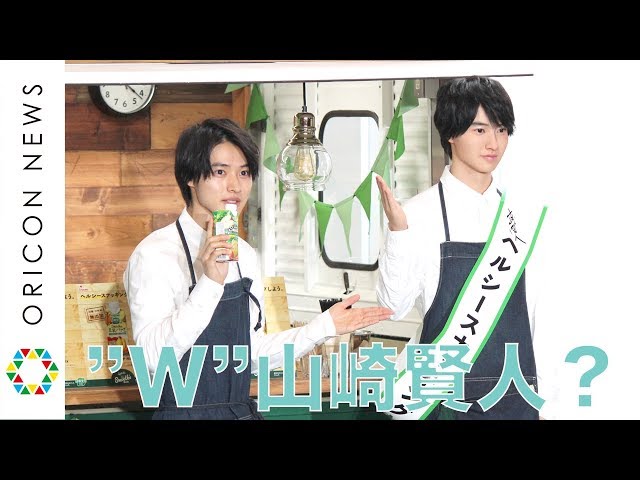 “Do you eat to live or live to eat?” is a common question used as an icebreaker during mealtimes, efficiently categorising the respondents as foodies or non-foodies. Unsurprisingly, Yamazaki is a prime example of the former.

Yamazaki once shared on the variety show King’s Brunch (王様のブランチ) that when he was younger, he used to eat kaarage (唐揚げ; fried chicken) while holding a rice ball in each hand. The young Yamazaki would also save his favourite dish for last as motivation to quickly finish up the rest of his meal. 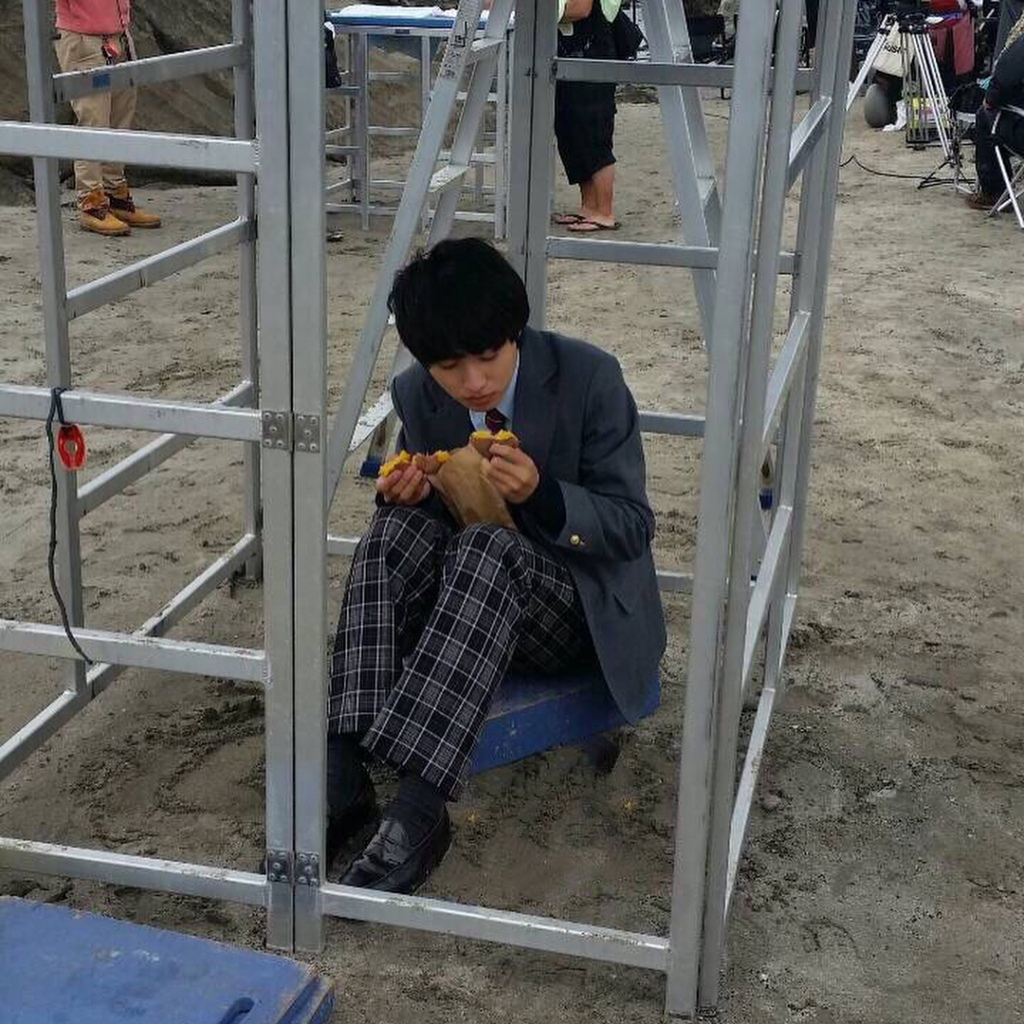 Although Yamazaki can’t afford to eat all he wants now, he still enjoys trying out new dishes – especially food with a chewy texture so it feels like he’s constantly enjoying it – and taking photos of his meals whenever he can. In fact, the actor-cum-model shared on the TOKIO KAKERU variety show that he’s so serious about food, he retakes food photos if they’re not up to standard.

5. Yamazaki is a “carnivore man”

Playing on the assumption that herbivores are weaker and less aggressive than carnivores, the terms “sōshoku danshi” (草食男子; herbivore man) and “sōshokukei danshi” (草食系男子) were coined to refer to men who are either passive in love or show little interest in having a love life.

On the other hand, “nikushoku danshi” (肉食男子; carnivore man) and “nikushokukei danshi” (肉食系男子) refer to men who are assertive and don’t shy away from confessing their love, and are hence considered more masculine.

In the Q&A section of his 2014 photobook, Genzaichi, Yamazaki answered that if he had a love interest, he’d be the one to confess first, thus affirming his identity as a “carnivore man”. Coincidentally or not, Yamazaki’s favourite food is meat, just like his Alice in Borderland co-star Tao Tsuchiya.

6. 7 years apart from his older brother

Yamazaki is the youngest in his family and has an older brother who’s 7 years older. Due to the huge age gap, the 2 siblings rarely fought growing up. 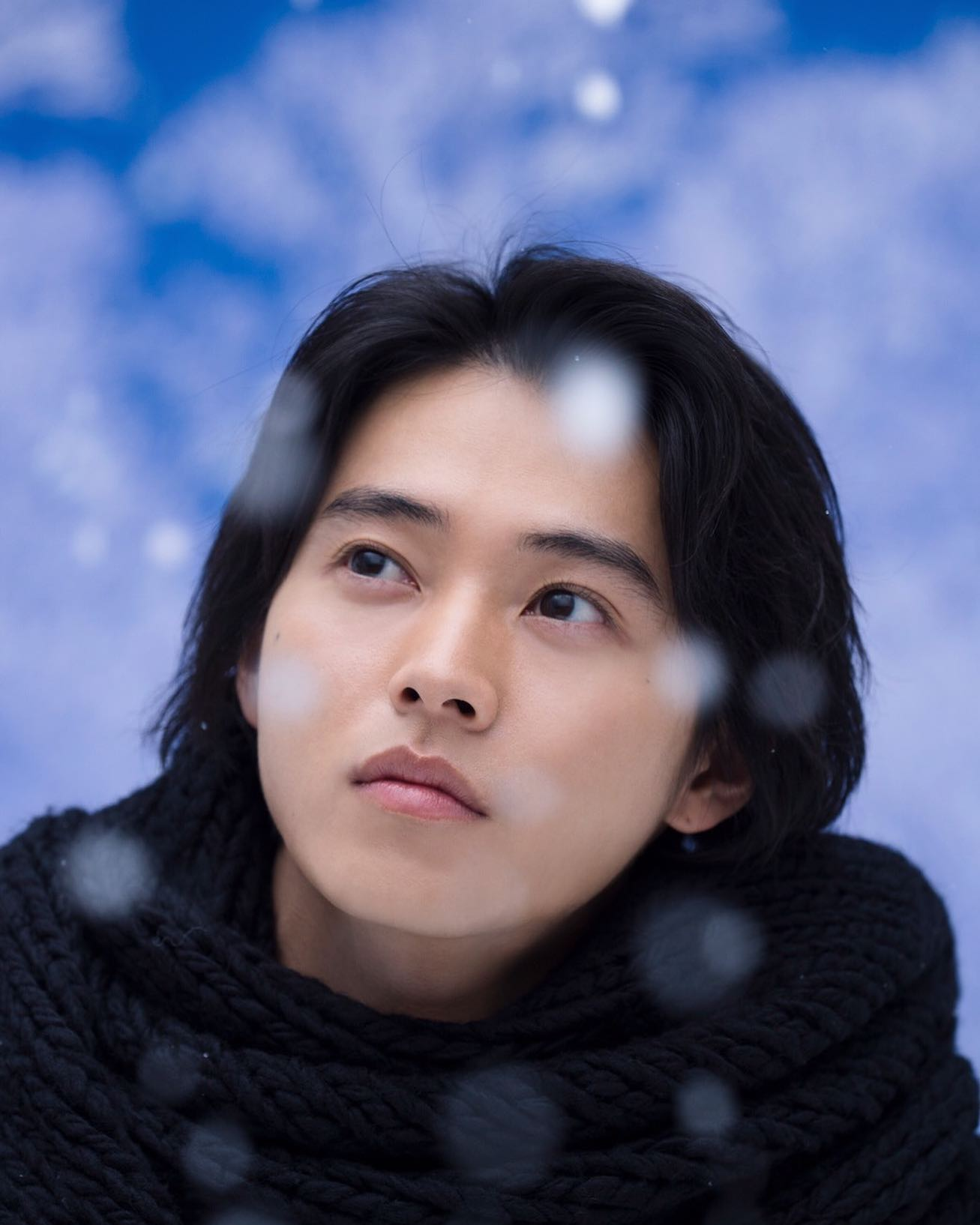 According to Yamazaki, that’s because the two siblings have vastly different interests, resulting in few common topics to debate over, and hence few conflicting opinions. If anything, they possessed more curiosity than rivalry towards each other. 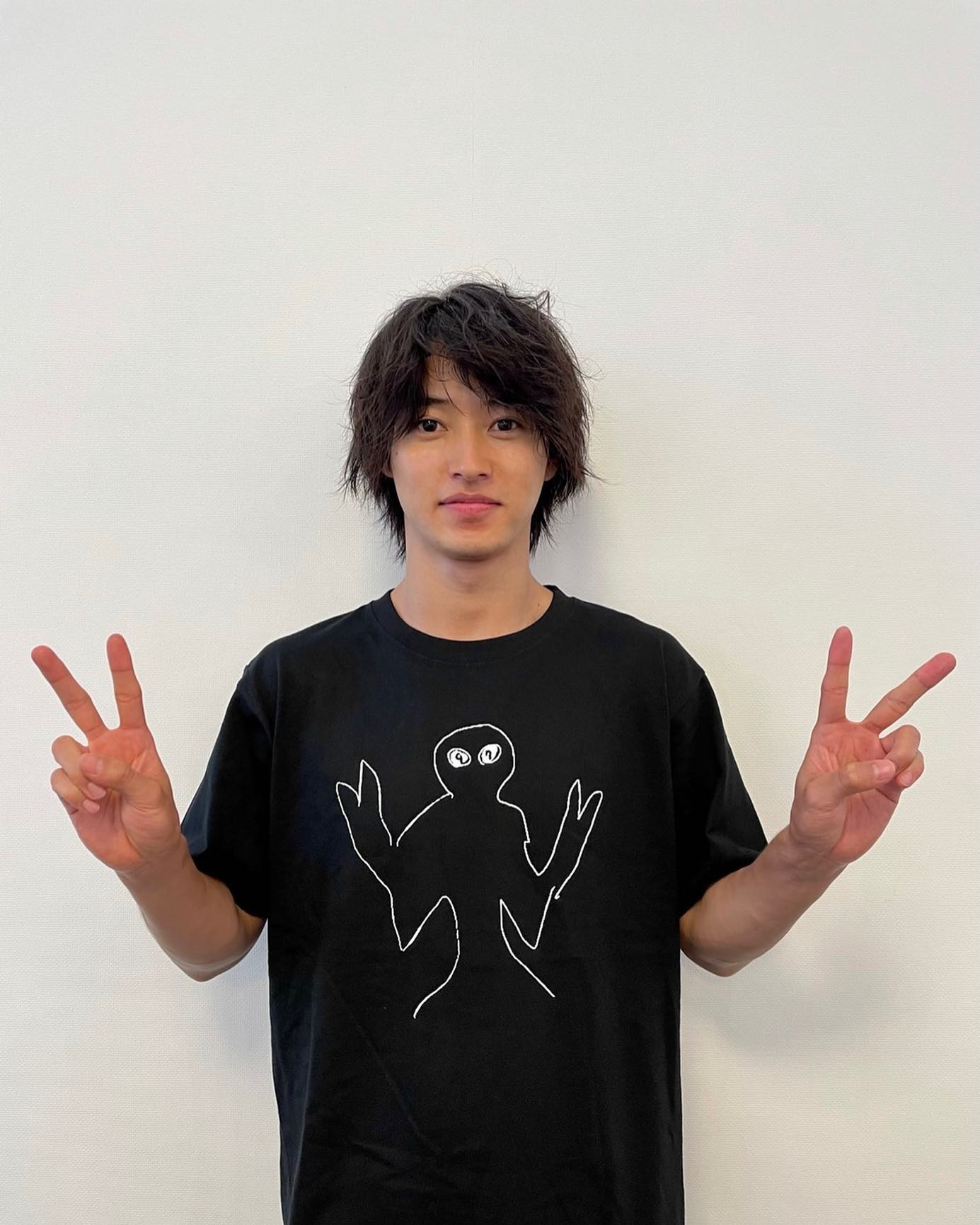 Although Yamazaki mostly keeps his private life and details of his family under wraps, he recently revealed that his older brother had a daughter. At a commemorative event for the The Door Into Summer movie in 2021, Yamazaki expressed that he was happy because his older brother’s then 2-year-old daughter Mei had started calling him “Ken-chan” instead of crying whenever she saw him.

7. Handled a gun for the 1st time while filming Alice in Borderland 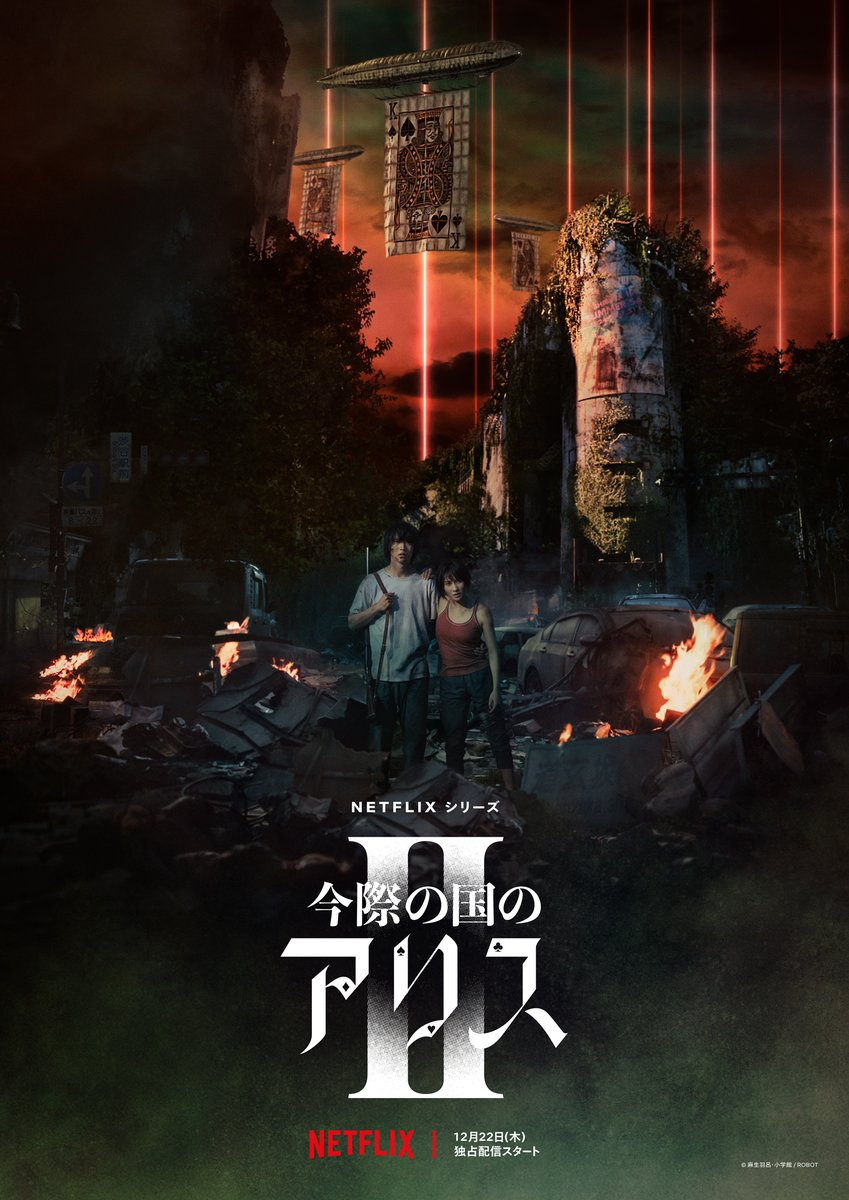 One day, when Arisu gets transported into a world filled with perilous life-or-death games on the regular, his previously latent strategic planning capabilities start to shine. 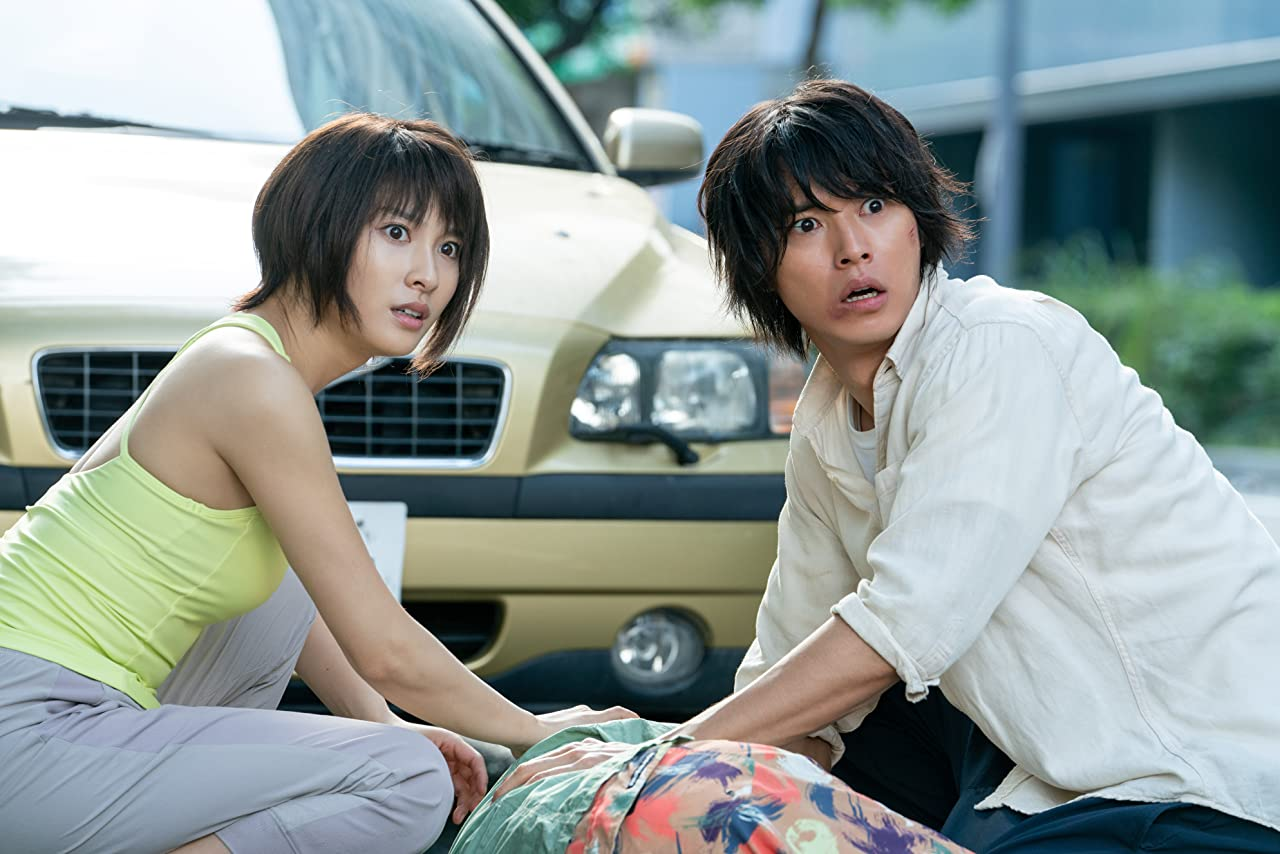 In an Alice in Borderland Season 2 promotional interview published on GamerBraves, Yamazaki explained that accurately portraying Arisu’s reaction towards firing a gun for the 1st time in the game-centric world was a challenge.

As Arisu was once a regular good-for-nothing who never had to handle a gun, one would expect him to show a range of emotions, including fear and shock, upon firing a shot for the first time.

However, it’s hard to act surprised when you know how the script’s going to play out. On top of that, scenes like this usually require more than 1 take, which means that it’s even harder to convey Arisu’s emotions in a manner that comes across as authentic. Nevertheless, Yamazaki thought he pulled off the difficult scene.

One of Kento Yamazaki’s best pals is the popular actor and singer Masaki Suda (菅田将暉), whom he first met on the set of The Wings of the Kirin. 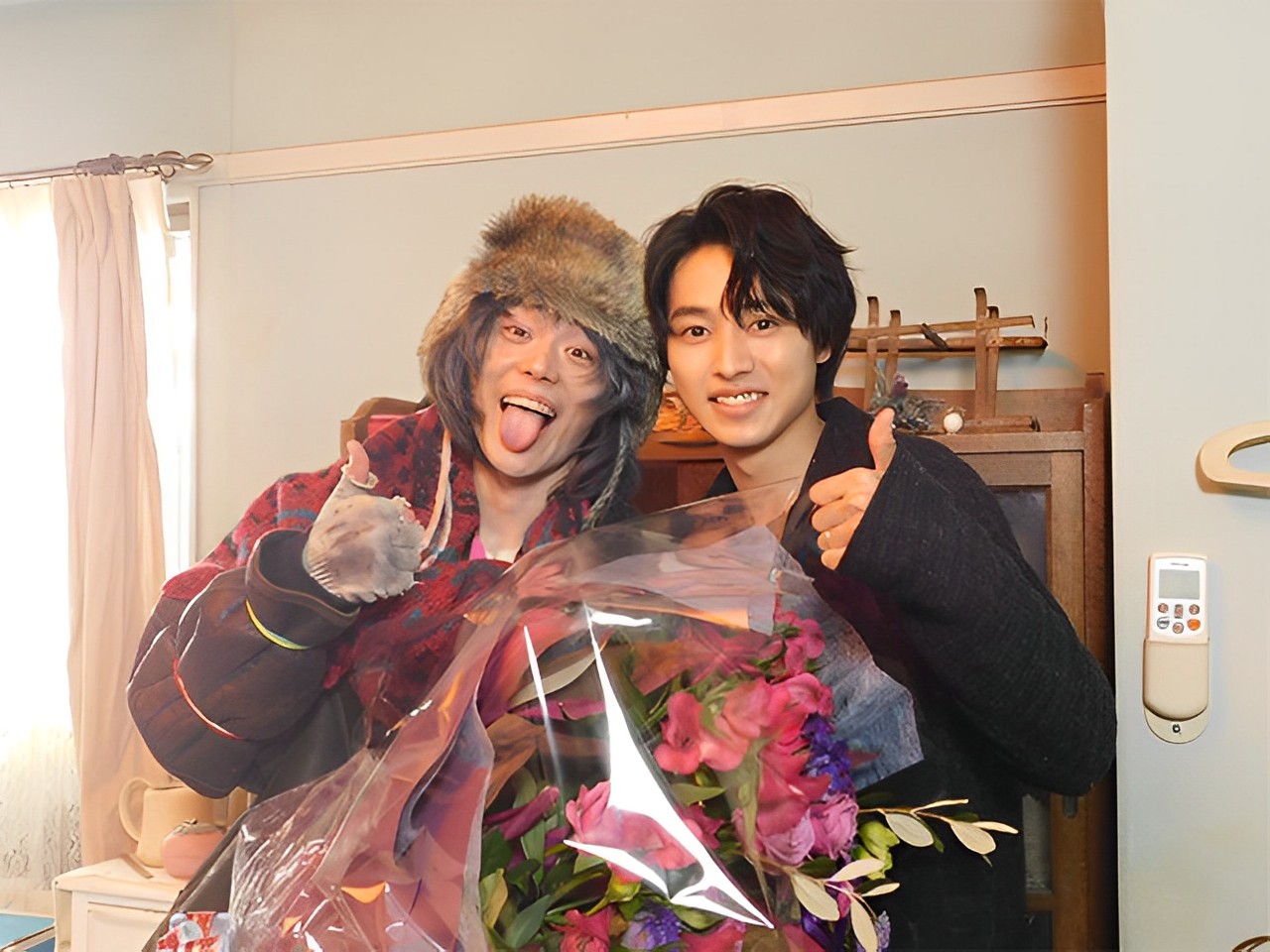 Yamazaki is notorious for acting wilfully around Suda, especially when he sleeps over at the latter’s house. The man himself admitted that whenever he wore tacky clothes over for a sleepover, he would leave them behind and don Suda’s favourite – and fashionable – items before heading home instead. To retrieve his clothes, Suda had to visit Yamazaki’s house – where Yazamaki’s parents also live – multiple times. 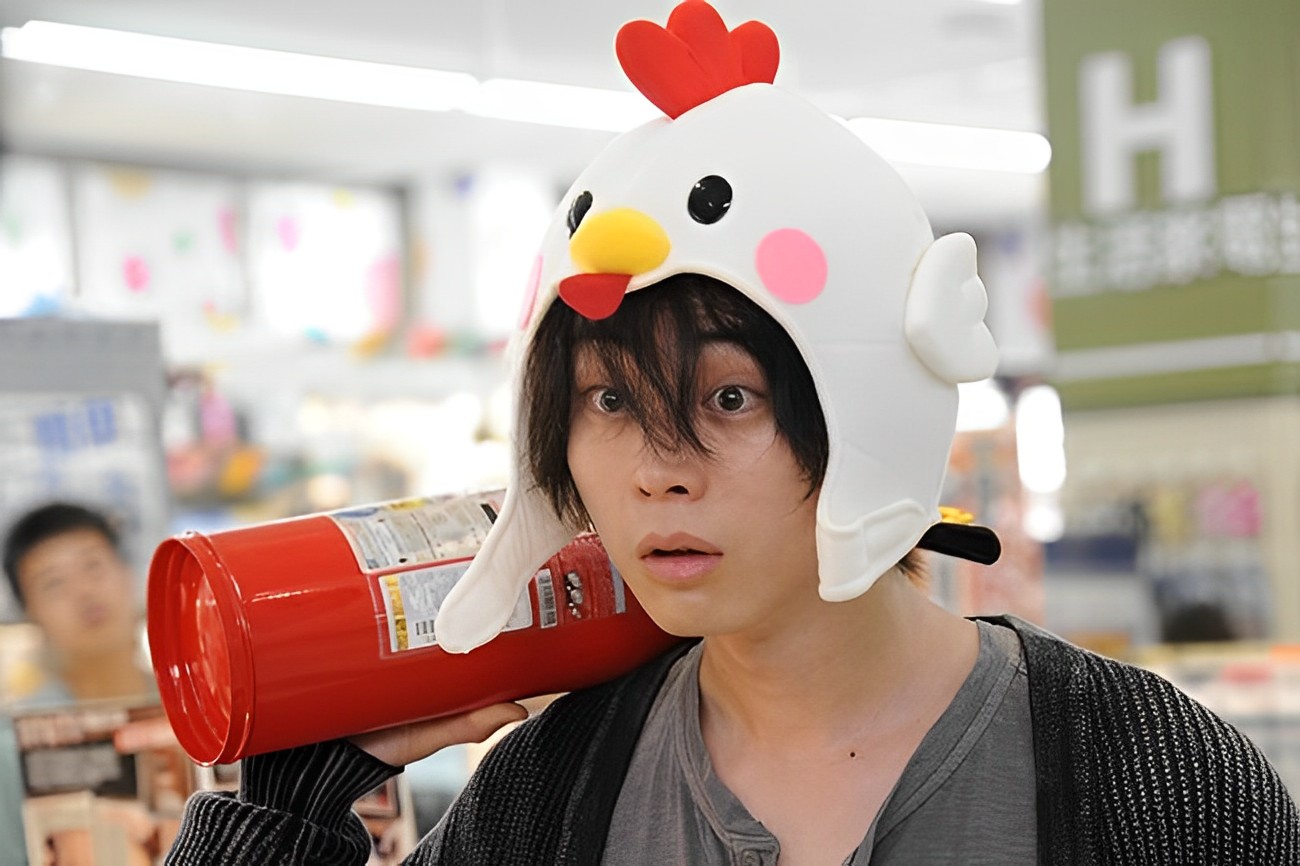 Due to the repeated “thefts”, Suda jokingly dissed Yamazaki on the variety show Oshareizumu for having 100 points in looks and 0 points in character. Evidently, their strong friendship shows in their unbridled teasing of one another both publicly and privately.

9. Known as the prince of romance movies

Starting with L-DK, Yamazaki played the male lead in multiple shōjo (少女; young girl) movies including Your Lie In April, Orange, and Wolf Girl and the Black Prince.

Although the listed works all belong to the same genre, the male leads in these J-romance movies have a range of personalities, from arrogant to reserved. In spite of the versatility demanded, Yamazaki pulled off each role. Orange, in which Yamazaki played Kakeru Naruse, won him the Newcomer of the Year Award at the 39th Japan Academy Film Prize and a nomination for the Best New Artist Award at the 41st Hochi Film Awards.

Fans were also captivated by Yamazaki’s role as a sadistic highschooler in Wolf Girl and the Black Prince as it differed from the usual good-natured characters he played. 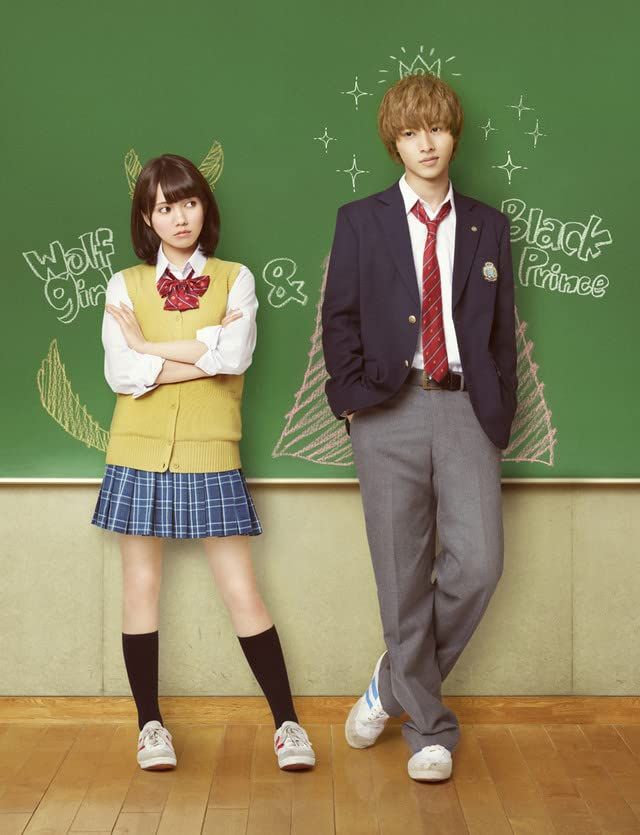 When the scenes of Yamazaki in said movie were played at a cast event, the girls present screamed in excitement, apparently having fallen even harder for the heartthrob

Watch them simp for Yamazaki’s character in Wolf Girl and the Black Prince here: 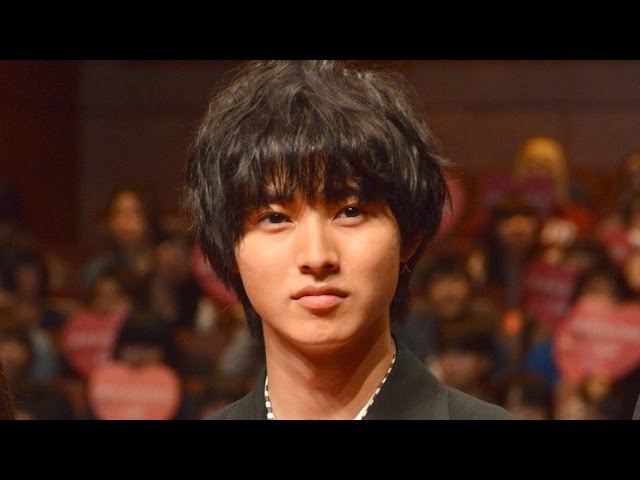 10. Learnt to play the piano for a drama role

To the surprise of many unsuspecting fans, Yamazaki personally played a number of songs on the piano in the Your Lie In April live-action movie, in which he played the role of Kōsei Arima. The tenacious actor-cum-model had to learn the instrument from scratch as he possessed no prior piano experience. 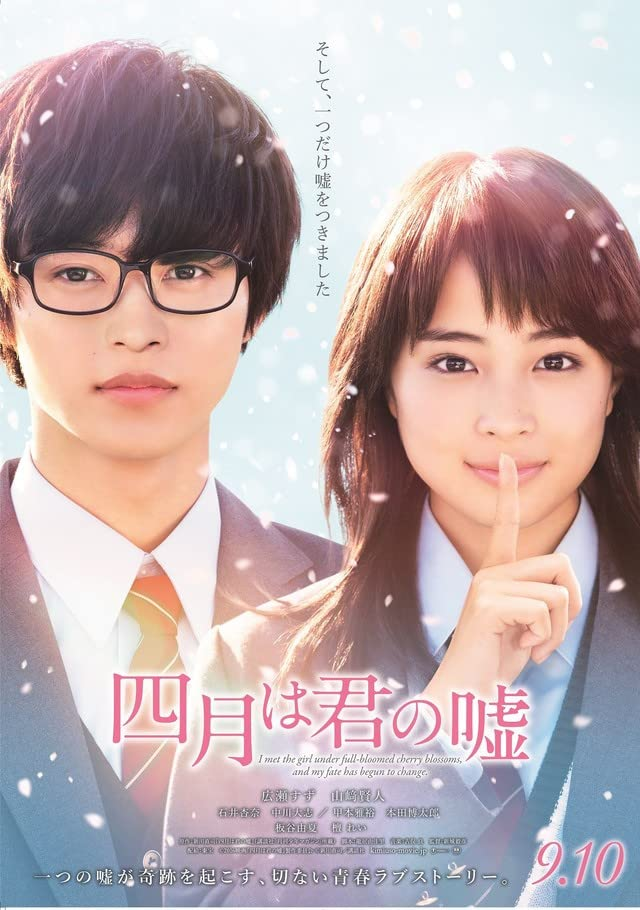 Starting 6 months before filming commenced, Yamazaki received daily piano lessons to hone his playing skills. He continued taking lessons even when filming was underway, and his hard work paid off – Yamazaki was praised by the director for slaying Twinkle Twinkle Little Star as his first song in the movie.

The affirmation soothed Yamazaki’s nerves and also motivated him to learn the next song – which required significantly better piano technical skills – Love’s Sorrow.

Love Sorrow is vital to the film’s plot as Arima first overcame his childhood trauma by playing the song. As a result, the scene – which was to be shot from different angles across 3 days – demanded consistent top-notch acting skills from Yamazaki, on top of decent piano-playing.

Throughout the filming process, Yamazaki concurrently received piano-playing and acting guidance. He also constantly got his arms massaged due to overexertion while playing the piano.

Upon watching the behind-the-scenes video, YouTube user @gracebrown6351 commented that they didn’t even suspect that Yamazaki, a novice, had played the piano himself. Since that implies that the performance sounded legitimate, Yamazaki’s efforts certainly paid off. 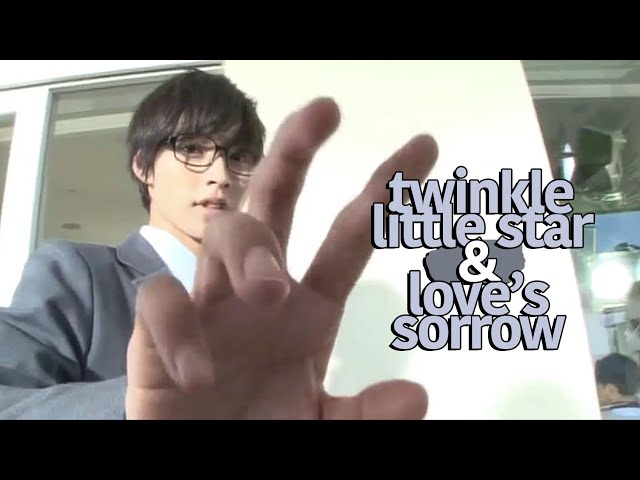 11. Rumoured to have a twin brother

Yamazaki, who enjoys goofing around, is famously rumoured to have an older twin brother thanks to one of his mischievous antics. 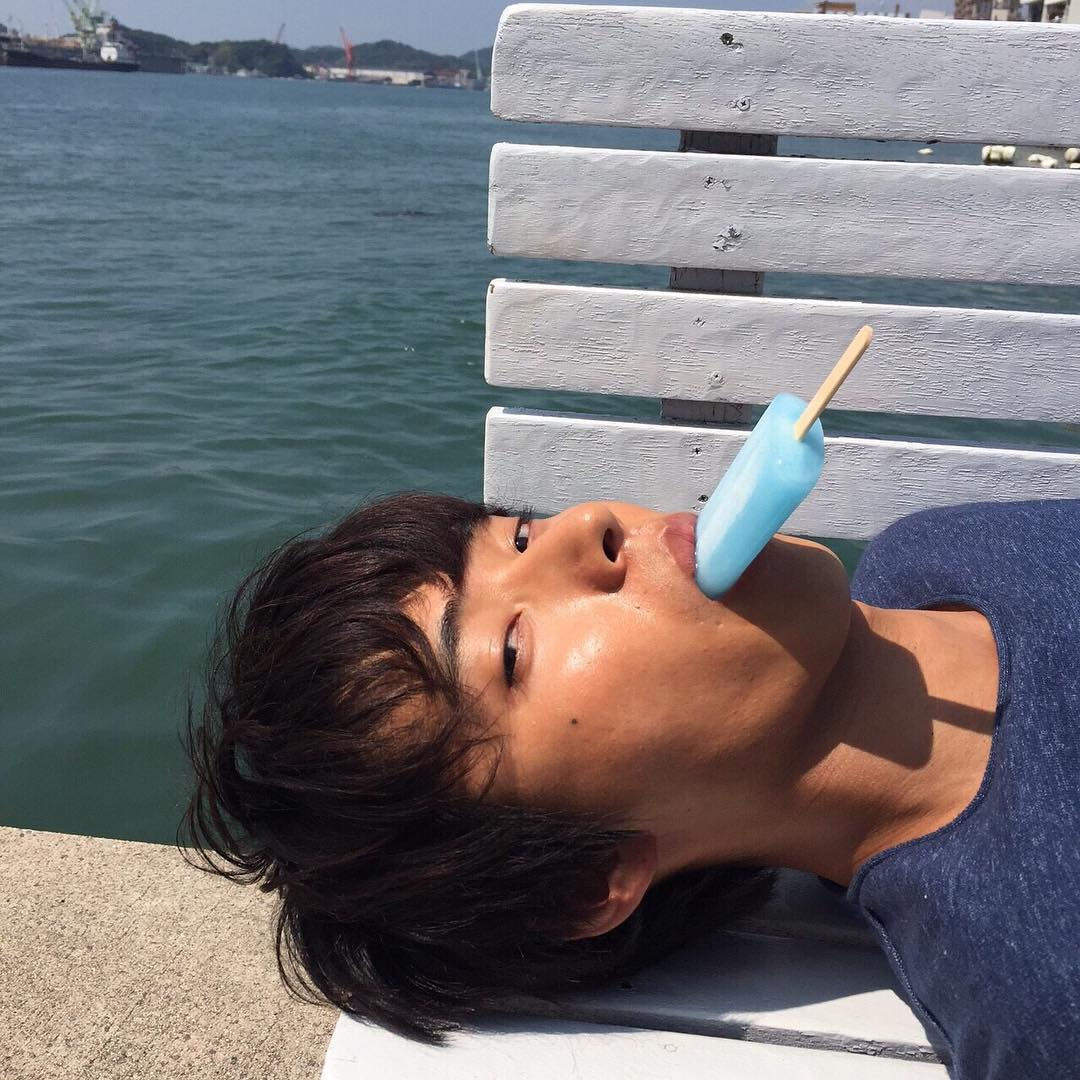 Shōhei Miura (三浦翔平), Yamazaki’s friend and colleague, once held an Instagram live where the latter suddenly showed his bare face for a couple of seconds without saying a word. 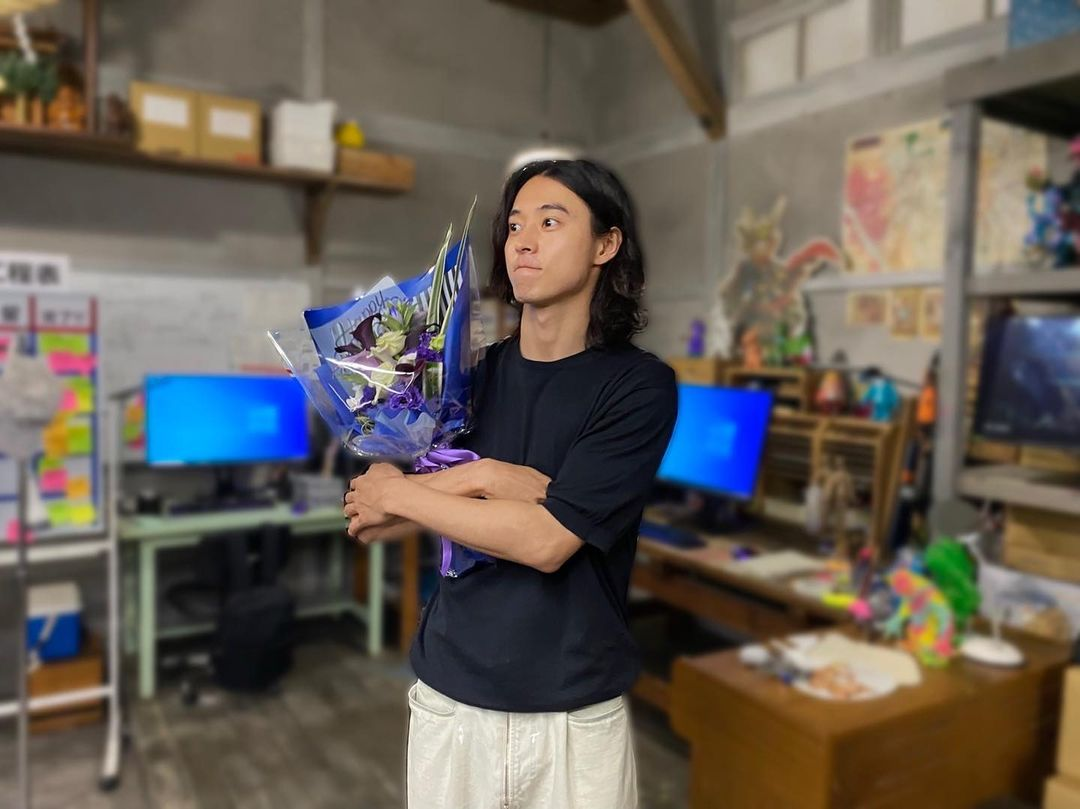 Surprised by his junior’s playful behaviour, Miura asked if Yamazaki would be chided by his agency for carelessly showing his bare face on screen. The latter agreed and said that would likely be the case.

Dumbfounded yet amused by Yamazaki’s antics, Miura clumsily covered up the unexpected cameo by claiming that it was Yamazaki’s older twin brother before abruptly ending the stream. 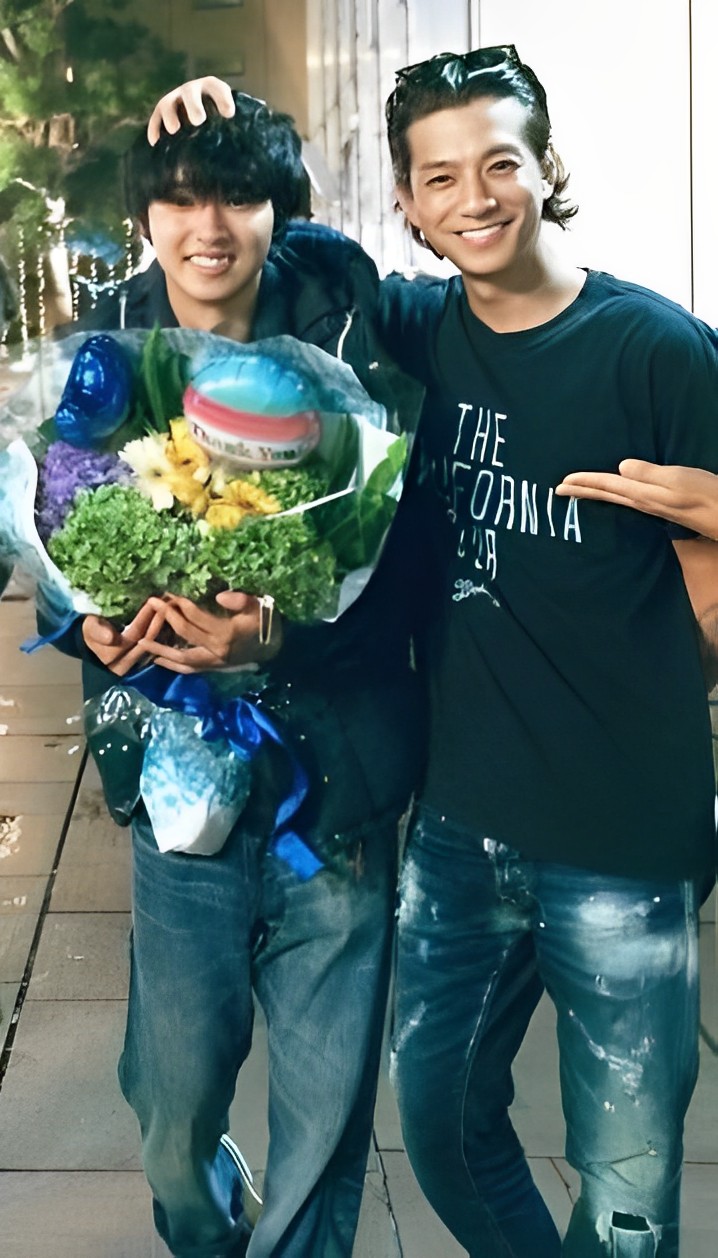 Yamazaki previously co-starred with Miura in the 2016 drama A Girl & Three Sweethearts. The filming process fostered a bond between the 2 actors, possibly explaining Yamazaki’s carefree shenanigans around Miura.

12. Touches his lips when ruminating

Everyone has small habits that they subconsciously do, and for Yamazaki, it’s constantly touching his lips when deep in thought.

However, the actor admitted that he’d never noticed this quirky habit of his until his manager told him about it. We all learn something new about ourselves every day, Yamaken included.

Yamazaki is a manga geek who possesses an enviable collection at home. Some of his favourite titles include Kingdom and Death Note, and the lucky fan successfully starred in the live-action adaptations of both series. 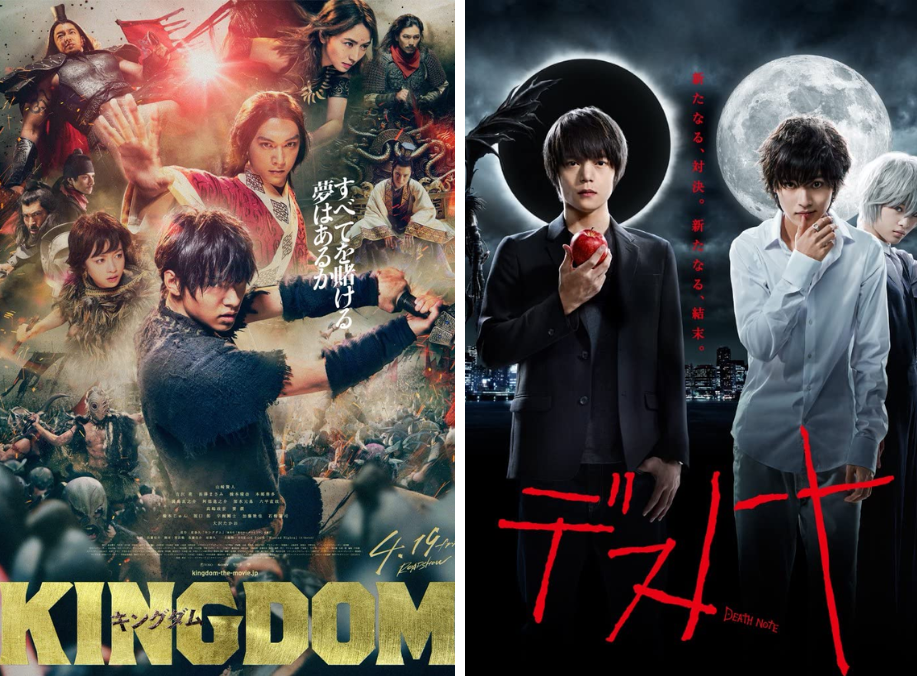 In the Kingdom live-action movie, Yamazaki played the protagonist Shin, an orphan who allies himself with an aggrieved ex-king to help reclaim the latter’s throne. As for the Death Note (2015) live-action drama, Yamazaki played Lawliet, otherwise known as “L”, who seeks to stop Light Yagami‘s slaughter of those he deems unworthy of living.

While Yamazaki portrayed Lawliet as slightly more unfriendly than shown in the manga and anime, some enjoyed this fresh take on a well-loved character.

Boasting endless creativity, curiosity, and good manners above all, Yamazaki has thrived in the entertainment industry for 13 years. Here’s to Kento Yamazaki, his continued success, and endless supply of fun facts for us to simp over. 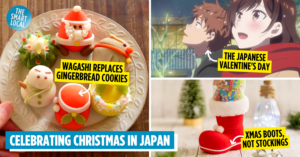