There are many ways a Japanese language learner can strive to sound as natural as possible. One sure-fire method is to incorporate Japanese slang appropriately into daily conversations.

When used in the right context, slang can help you level up your casual speech and sound more like a native speaker. Take a break from grammatically correct Japanese and use these 20 Japanese slang in real–life conversations and over text messages to impress your Japanese friends.

For more language guides, check out these articles: 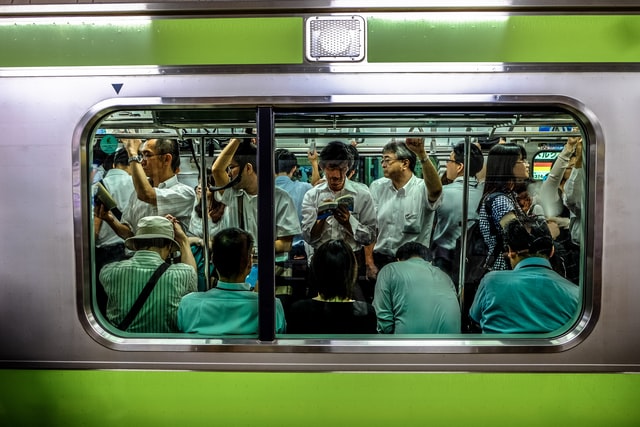 In Japanese culture, unspoken rules abound and there is always a right time and place to perform any action. If someone is deemed unable to do what is expected of them in social circumstances, they will likely be called “KY”.

The slang “KY” is short for 空気読めない (kūki yomenai) and reads as “kay-why”. To translate it literally, it means being unable to read the air. Simply put, “KY” people are those who are oblivious to social situations and they are often inept at reading between the lines.

Originating from Tama, a city in Tokyo, “うざい” (uzai) was initially a regional dialect. By the latter half of 1965, the usage of the slang became common among youths outside of Tama, and it eventually spread all over Japan.

This slang is an abbreviation of “うるさい” (urusai), which means annoyingly noisy. Note that it sounds extremely casual and can come across as rude when used inappropriately, so it is best suited for use among close groups of friends. When you find your friends bothersome and want to tell them to shut up, say “うざい” (uzai) in a jocular manner. 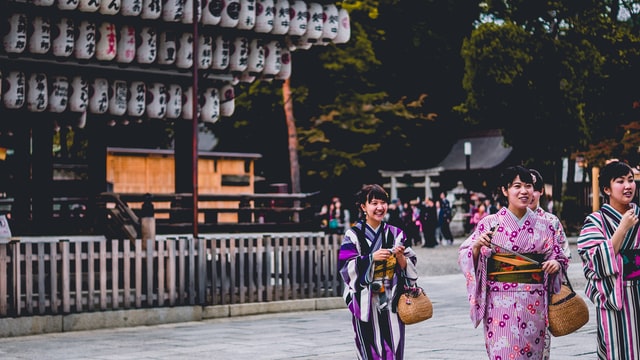 If you’re someone who tends to add “lol” at the end of your sentences, this one’s for you. This Japanese equivalent functions in a similar way as it expresses amusement, though you’d hardly hear it in real life as it is mostly used online and over texts.

The slang “w” is an acronym derived from the verb “笑う” (warau), which means “to laugh”. Typically, you would use it as a stand-alone or affix it to the end of a sentence. Type a single “w” if you are slightly amused, or repeat it several times – “wwwww” – when you’re seriously tickled. Some Japanese also type “笑” instead of “w”, but it is much more efficient to type the letter on certain keyboards. 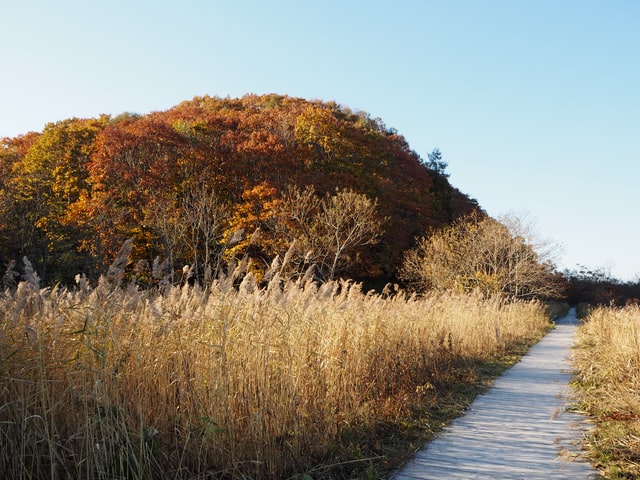 Another expression for “lol”, the slang “草” (kusa) is pretty much interchangeable with “w” – use it as you would use “w”. It’s short for 草生える (kusa haeru), which means to “grow/sprout (生える) grass (草)” in standard Japanese.

“草” is derived from “www”. Though it requires a bit of imagination to make the connection between the two, the meaning of “草” instantly makes sense once you get the full picture – a row of “www” resembles grass sprouting from the ground.

Other related terms include “草不可避” (kusa fu kahi), meaning “one can’t avoid the grass”, which is useful when you find yourself in a hilarious situation where you can’t avoid laughing. However, it is not as frequently used as the singular kanji character.

“ヤバい” (yabai) is one of those words you’d come across frequently when speaking to native speakers, yet it’s rarely covered in textbooks. This is an important slang to master as its usage is not only ubiquitous in Japan, but it can also convey a range of meanings.

This handy term describes just about anything and everything, from positive to negative situations. Depending on the context, yabai can mean “amazing”, “awesome”, “terrible”, or simply express shock and surprise.

Originally, it had the connotation of “dangerous”, but the word took on broader meanings when it morphed into a casual slang. Once you’ve gotten the hang of it, try omitting the “い” (i) and shortening the slang to “ヤベ” (yaba) for emphasis. Its colloquial pronunciation, “ヤベー” (yabee), is also popular. 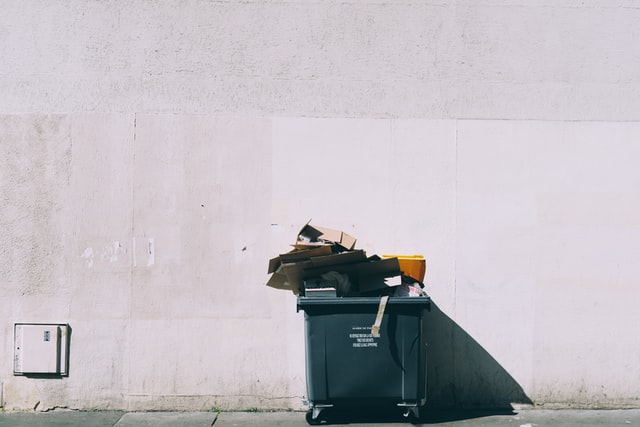 Yet another abbreviation to add to your slang repertoire, the phrase “キモい” (kimoi) is short for “気持ち悪い” (kimochi warui).

The slang translates to “gross” or “disgusting” and you can use it for anything that gives you an unpleasant feeling – from a stranger who gives you the creeps to a foul smell. As with other i-adjectives, the “い” (i) can be removed, further shortening the slang to “キモ” (kimo).

A versatile slang that means “really” or “seriously”, “マジで” (majide) can be used in sentences to add emphasis in a way that’s similar to “本当に” (hontōni). For example, “マジでやばい” (majide yabai) translates to “seriously insane”.

When uttered on its own, it also functions as a question to convey your bewilderment. Use “マジで?” (majide?) with a rising intonation when you’re in disbelief. “で” (de) can be omitted without altering its meaning. 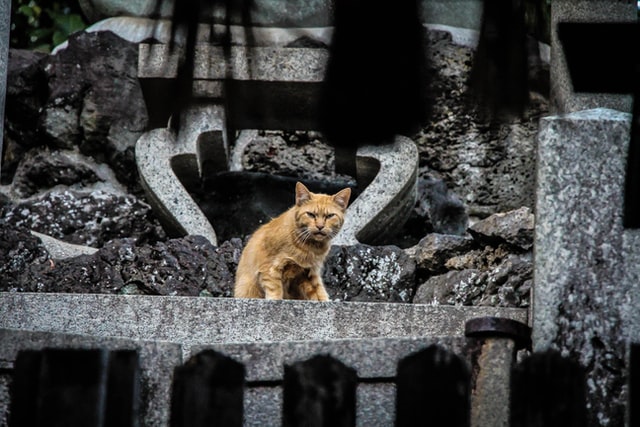 “ムカつく” (mukatsuku) originated from the Japanese onomatopoeia “ムカムカ” (mukamuka), which describes the sensation of having an upset stomach or acid reflux.

The “つく” (tsuku) in “ムカつく” comes from “作る” (tsukuru), which is the verb for “to make”. Together, the term describes the state of someone getting angry or offended, or that something has pissed you off. 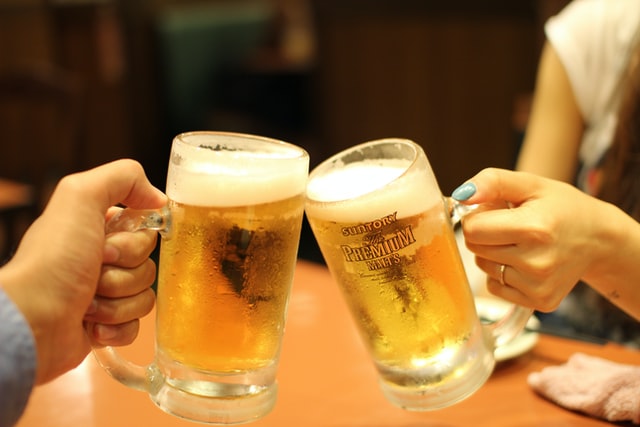 “KP”, pronounced “ケーピー” (keepii), simply means “乾杯” (kanpai) – “cheers” or “bottoms up”. The usage started when creators on Youtube and Niconico – a Japanese video-sharing site where comments are overlaid directly across the video – would caption “KP” when making a toast with the audience. Gradually, the usage of the term grained traction as many would include the slang in their captions on Instagram Story. 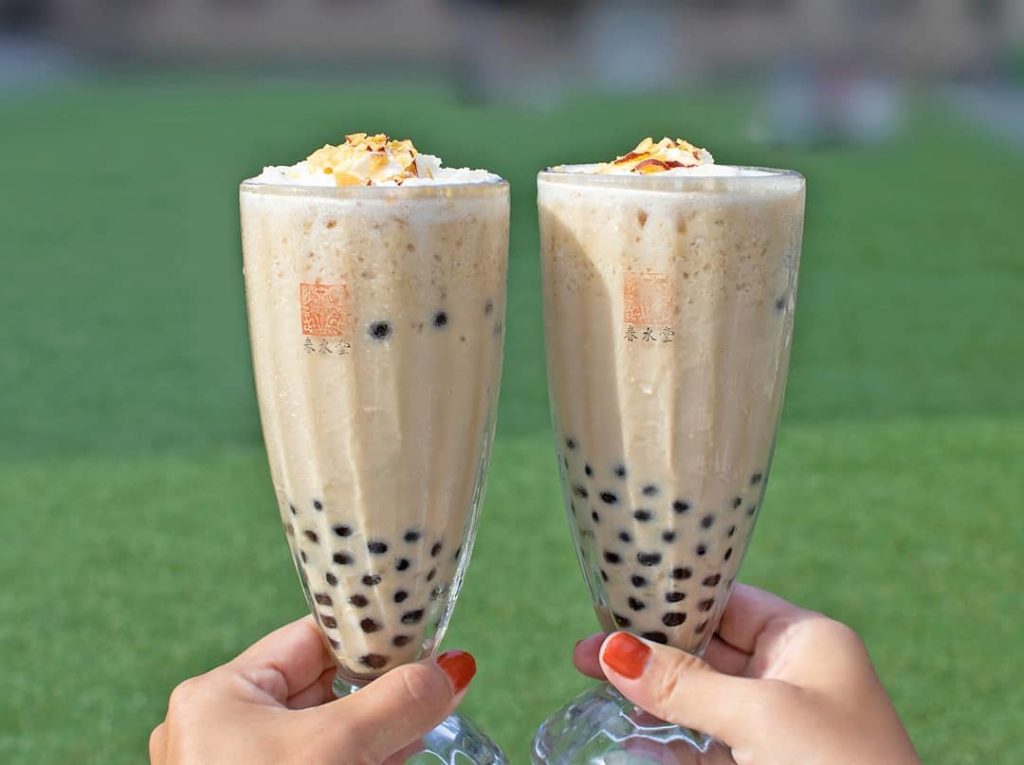 It is no secret that bubble tea has taken the world by storm in recent years, with chain stores selling the beloved beverage popping up globally, including in Japan.

Boba, better known as “tapioca” in Japan, is so popular that a slang verb for drinking bubble tea was created. “タピる” (tapiru) combines the verb base “タピオカ” (tapioka) and suffix “る” (ru). Craving for some bubble tea? Hit up your friends by saying “タピりにいかない?” (tapiri ni ikanai?), which means “Wanna go get bubble tea?”. 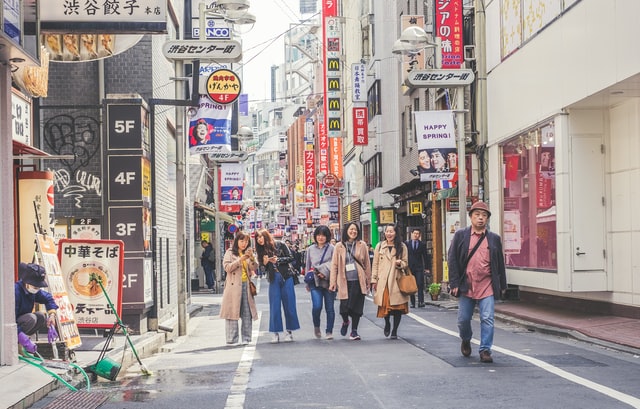 “おつ” or “乙” (otsu) was originally meant as a shortened form of the greeting “お疲れ様でした” (otsukaresama deshita). It is used to show appreciation for someone’s – usually a colleague – hard work. But it’s increasingly being used ironically by young people in varying contexts outside of the workplace.

For instance, if someone got off to a rough start in the morning because they overslept, try saying “大変だったな、乙” (taihen datta na, otsu) as a way of consoling them for the “hard work” and ordeal they’ve been through. 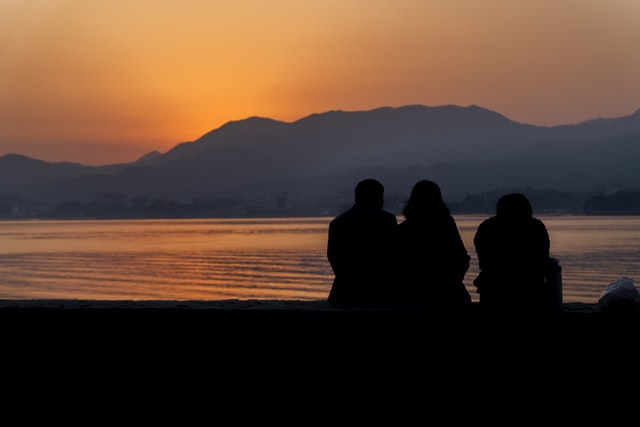 “エモい” (emoi) comes from the English word “emotional”, which was abbreviated to “エモ” (emo) and affixed with the suffix “い” (i) to form an i-adjective. Unlike its original definition in English, the slang takes on multiple meanings in Japanese.

The slang can be used in general to describe a range of emotions from nostalgia to melancholy. Saw an amazing sunset and feeling sentimental? Listening to an old song and hit with a wave of nostalgia? Chances are, you are feeling emoi. 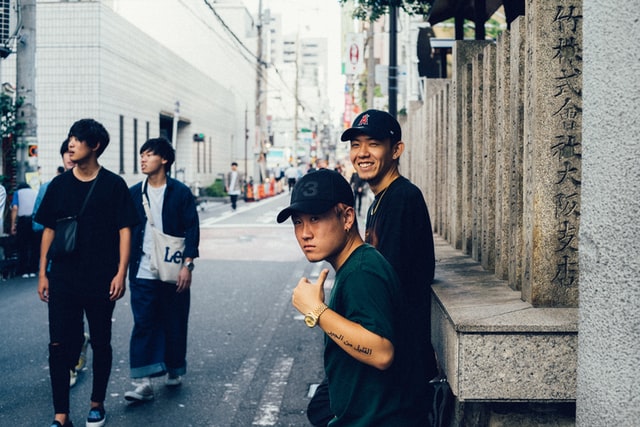 Essentially a casual and extremely colloquial way of saying “thank you” in Japanese, “あざっす” (azassu) is short for “ありがとうございます” (arigatō gozaimasu). This term is said to be first popularised by popular Japanese comedian Hironari Yamazaki over 10 years ago. He would use it frequently on variety shows, and over time, the slang gained currency.

It can come across as rather masculine–sounding, as younger males typically use “azassu” within close groups of friends. Due to such nuances, it is generally not a good idea to use it on a senpai you’re not close to, or someone much older than you. 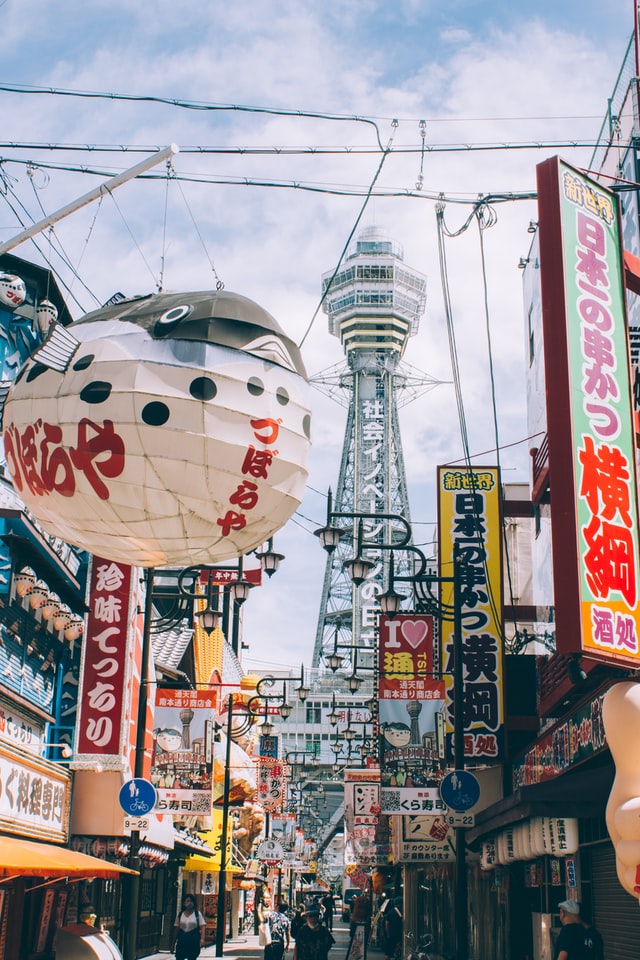 A word that translates to “very”, “めっちゃ” (meccha) is handy when you want to diversify your vocabulary in everyday speech instead of overusing “とても” (totemo) – its equivalent in standard Japanese.

Although the slang has its roots in Kansai dialect, its usage gradually spread nationwide when entertainers from the Kansai region started using it on television programs. 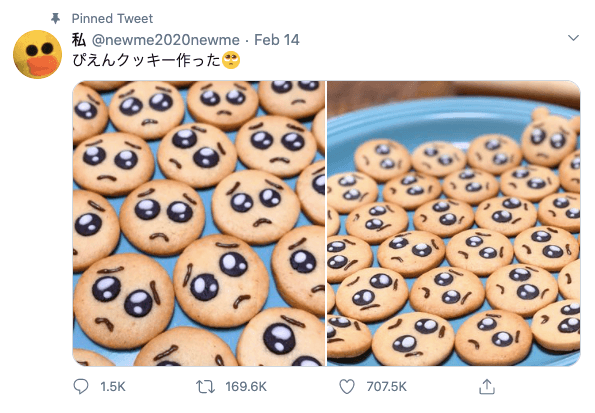 The emoji that expresses the sentiment of “pien”.
Image adapted from: @newme2020newme

Not a word that you’d hear regularly in real life conversations, “ぴえん” (pien) trended online in 2019 and was such a huge buzzword that it spawned a horror game. This internet term expresses being sad or crying in a cutesy manner, and is the slang equivalent of the pleading face emoji.

Users of social media sites like Twitter or Instagram, especially young women, would affix “pien” to their sentences. For instance, a young woman would express sadness about her singlehood by lamenting that she “wants a boyfriend, pien” (彼氏欲しい、ぴえん; kareshi hoshii, pien), complete with the emoji with pleading eyes. 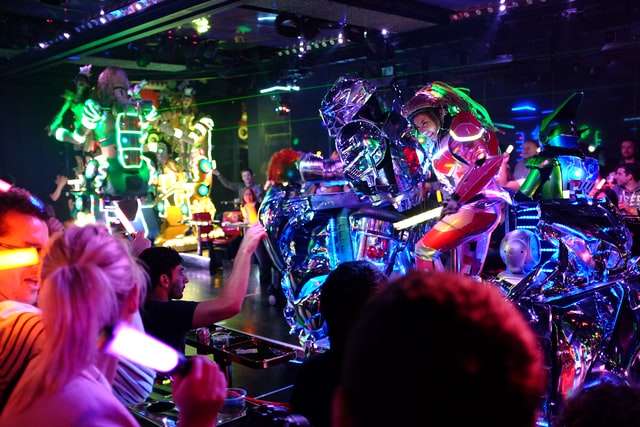 To save yourself from fumbling over long loanwords like “パーティピープル” (paati piipuru, party people), you can use “パリピ” (paripi), which is an abbreviation that conveys the same meaning. The term mainly refers to people who like to be at where the action is, such as clubbing, going to music festivals or seasonal events like Halloween or Christmas parties.

It can also describe a sociable individual who is lively and energetic. To change the slang to a verb, simply attach the suffix “する” (suru) to its end. You can say “パリピした” (paripi shita) if you’ve partied. 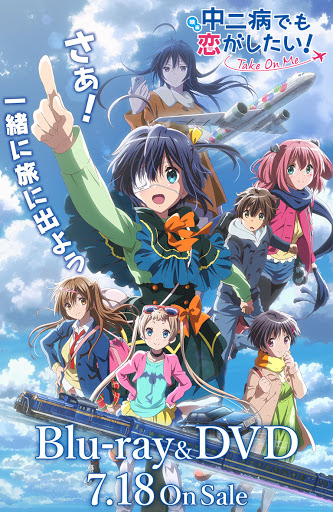 First coined by entertainer Hikaru Ijūin on his radio program in 1999 and later popularised by the anime series Love, Chūnibyō & Other Delusions, the term “中二病” (chūnibyō) literally translates to “middle school 2nd–year syndrome”.

Teens who act like know-it-alls are the perfect poster children for this syndrome. Due to their strong desire to stand out from the crowd, these teens in question firmly believe that they wield some sort of secret power or knowledge. Though the slang mainly refers to teenagers in stages of adolescence, it can also be used on adults who act immaturely.

“たん” (tan) is a variant of the suffix “ちゃん” (chan) and it is probably the cutest casual name suffix in Japanese language. The pronunciation is similar to baby talk as it is supposed to emulate how a small child would misarticulate “chan”. Use it like how you would use “chan”, but do so sparingly as you might end up sounding too cutesy otherwise.

Apart from adding it to people’s name, you can also attach the suffix “tan” to adjectives to add a soft and cute nuance. “かわたん” (kawatan), “ヤバたん” (yabatan), or “怖たん” (kowatan) – “cute”, “insane”, and “scary” – are just some of the ways people modify their words. 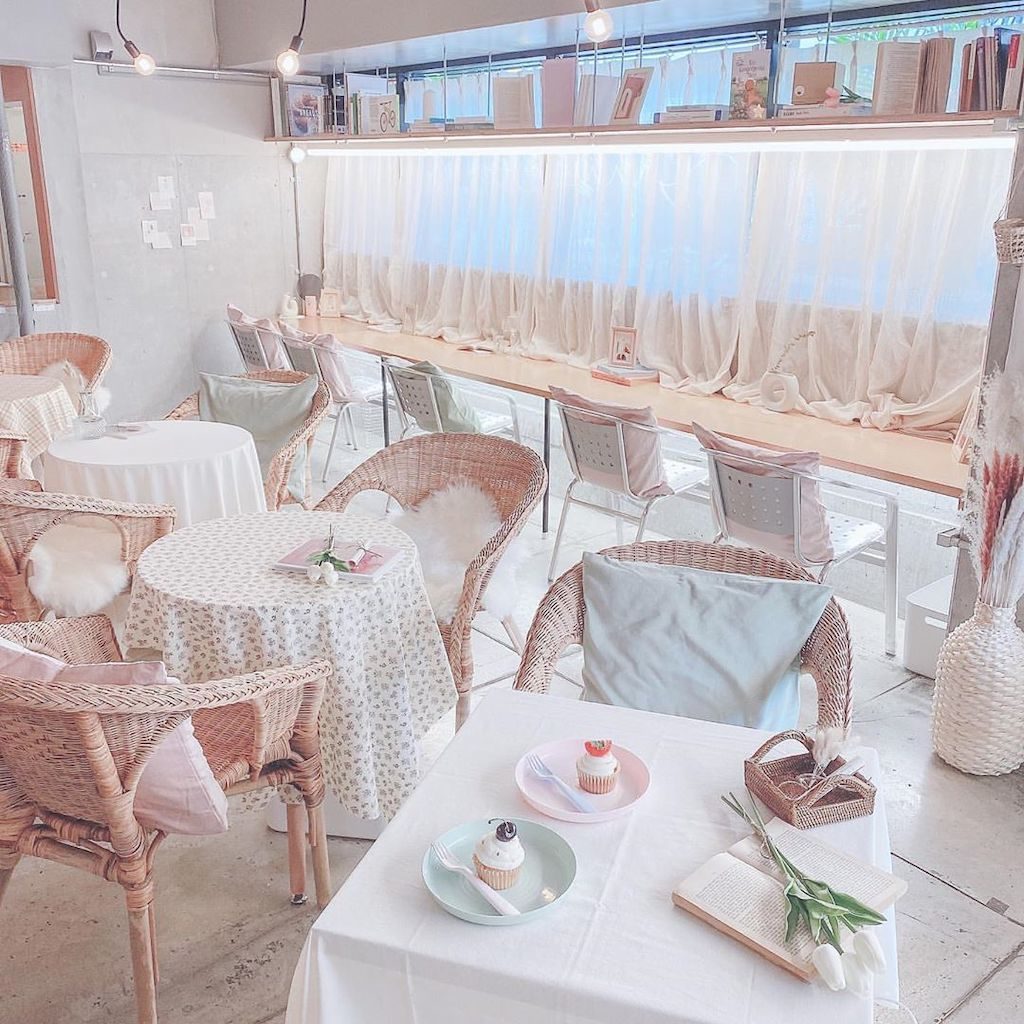 Apart from being used among high school and college students, this slang is also a phrase often featured on magazines or social media. Started and popularised by Shiro Kameda, the Japanese Youtuber would frequently use “3150” in his videos. Eventually, the catchphrase caught on and came into vogue, and now it is a popular hashtag on social media. Had a delicious ramen? Upload a picture of it with the hashtag #3150.

Granted, Japanese slang is hard to learn because they come and go so quickly. But putting in that extra bit of effort to master slang will not only deepen your understanding of Japanese language, but also open your world up to new ways of expressing yourself.

Check out these for more interesting articles on Japan: 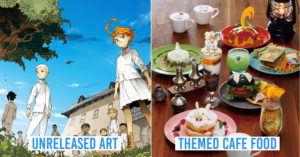 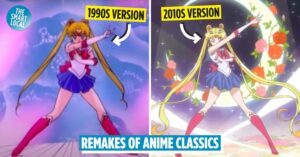